Keep the River on Your Right: A Modern Cannibal Tale

Directed by David Shapiro, Lauri Gwen Shapiro
An extraordinary documentary about an unusual man whose questing spirit is a marvel to behold.

Fasten your seatbelts! Here is a daring documentary about an elderly New York City artist who demonstrates that looking at, listening to, and learning from other cultures create the modern day equivalent of life as a pilgrimage. The act of visiting special places stands out as one of the most ancient ways to demonstrate respect for nature and spirit. It is also a way of imbuing our lives with meaning, inspiration, and healing.

Tobias Schneebaum made a name for himself in the art world during the 1950s. But the former rabbinical student had other yearnings he wanted to satisfy. He won a prestigious Fulbright Grant to paint in Peru in 1955. While there he decided to visit a remote mission dedicated to serving the Amarakaire Indians. The directions he was given were "Keep the river on your right." After he had been in the rainforest for a year, the New York artist was presumed dead. But he came out of the jungle with an amazing story to tell about his time with the Amarakaire, including his participation in a cannibalism ritual.

Schneebaum wrote a memoir about his stay in the Amazon, Keep the River on Your Right, which is still in print. He appeared on "The Mike Douglas Show" and spoke elsewhere about his shocking experiences. In order to support his modest lifestyle in New York, Schneebaum then developed an interest in the Asmat of Indonesian New Guinea. We see him aboard a luxury cruise ship giving lectures on their art.

While visiting the island to view a ritual circumcision ceremony, Schneebaum is convinced by the film crew to venture into the hinterlands to Asmat, a special place to him, which was also the spot where archaeologist Michael Rockefeller disappeared years ago. Schneebaum is reunited with Aipit, a former lover of his. The two men share the warmth of their re-encounter.

The final leg of this pilgrimage for the artist and world traveler is a trip back to the Peruvian jungles where he was compelled to eat human flesh. Much to his surprise, he meets six members of the original hunting party who were part of the raid on another village 45 years earlier. Schneebaum is able to exorcise the demons of the cannibalism experience.

Filmmakers David Shapiro and Lauri Gwen Shapiro have made an extraordinary documentary about an unusual man whose questing spirit is a marvel to behold. Keep the River on Your Right celebrates the courage, stamina, and wisdom of an elder who is still an explorer at heart.

The DVD provides further insight into Schneebaum with a gallery of still photographs, original sketches by the artist, and color illustrations from a children's book, Jungle Journey, he illustrated. There are also a few deleted scenes and biographies of the filmmakers and their subject. 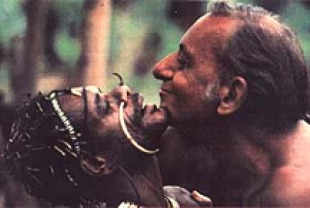