Directed by Doug Wolens
An inspiring documentary that serves as an initiation rite into a spiritual relationship with the Earth.

It takes a bold and visionary documentary like this one to present the struggle that is being waged right now between the forces of the status quo and those who believe in a new ecological ethic. In 1997, Julia Butterfly Hill climbed to a 6' X 8' perch 180' up in a 1,000-year-old redwood tree, which she named "Luna," and began a two-year campaign to prevent her host from being cut down. This daughter of an Evangelical preacher received food and supplies from a ground support team consisting of members of Earth First!, a radical environmental group dedicated to civil disobedience in defense of the good Earth.

Hill shares the ethic of love that is at the heart and soul of her reverence for the forest. It is inspiring to see this twenty-something young woman speak eloquently about our duty to future generations. Her spiritual perspective is right in line with that of St. Francis who loved the natural world with great passion and humility. Although Hill is criticized by some in the local community and the media for being "the crazy woman in the tree," her courage and conviction make her into a heroine of stature.

Filmmaker Doug Wolens depicts the varied responses to Hill from the Earth Firsters! Initially, they salute her act of bravado but then a few grow wary of all the media attention given to her rather than the movement at large. Meanwhile, from her treetop perch, Julia conducts interviews on a cell phone, entertains reporters and supporters who climb up to visit, and responds individually to thousands of letters. The documentary filmmaker also presents interviews with lumber company executives, local townspeople of Humboldt County, and media personalities including Mickey Hart and Peter Yarrow.

Since its hostile takeover by corporate raider Charles Hurwitz, Pacific Lumber has closed off much of the forest from local residents and started clear-cut harvesting practices that are obviously destructive to the environment, causing mudslides and sullying salmon pools. Company representatives blame the weather, not logging. But several townsfolk fondly remember the old days when the company practiced sustainable forestry and selectively harvested trees. Now their entire way of life and their homes are threatened.

Watching this inspiring documentary is an initiation rite into a spiritual relationship with the Earth. In one of the most poignant moments of the film, Hill talks about her dialogue with Luna during a terrible storm when she feared for her life. As she clung to her branches, she got a clear message — that she should be like the trees in the forest, to not try to stand firm but to relax into the wind. Following her heart and listening to the natural world, Hill eventually reached an agreement with Pacific Lumber in which Luna and her hillside in a three-acre buffer zone are protected. St. Francis surely rejoiced upon hearing the good news! 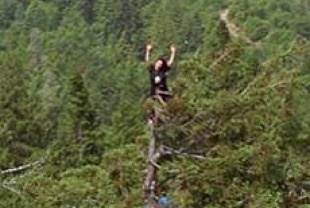