Directed by Judy Irving
A documentary cherishing the beauty of an injured pelican and her journey back to the wild.

Documentary filmmaker and avian enthusiast Judy Irving enchanted us with her 2005 film The Wild Parrots of Telegraph Hill in which she demonstrated a remarkable respect for birds and their idiosyncratic ways. Now this Emmy-winning director shows us the rehabilitation of Gigi, a four-month-old pelican who caused quite a commotion when she decided to take a stroll on the Golden Gate Bridge in San Francisco after she sustained a wing injury.

We learn quite a lot in this documentary about these creatures whose presence on Earth dates to prehistoric times; they are our elders who evolved from reptile-like land animals. Pelicans were put on the endangered species list in 1970 due to the effects of the pesticide DDT. In 2009, they were taken off the list but they are still having a hard time surviving.

Although Irving takes a fancy to this wounded bird, she never lets us forget that Gigi is a wild animal with her own instincts, habits, and foibles. She follows the entertaining relationship between another pelican and a duck and introduces us to a few wildlife rehabilitation volunteers who also reveal a healthy respect for Gigi and the other animals undergoing rehabilitation. By the end of Pelican Dreams, you will feel as we do that the flight of pelicans is a thing of great beauty.

We remembered a passage in the memoir of Donald McCullough where he shares the same kind of awe as Irving's:

"A brown pelican glides along the crest of a wave with unlikely grace. He is a large bird with an extravagant bill far out of proportion to the rest of his body. He seems misshapen, a victim of some evolutionary prank, aerodynamic impossibility. Yet there he is, the tip of his wing caressing the edge of a wave, sailing with ease and dignity and even beauty." 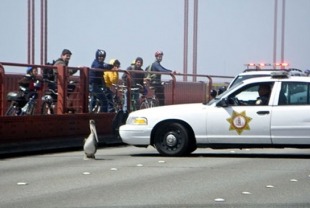 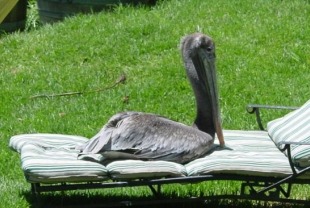