Song of the Sea

Directed by Tomm Moore
An Irish folktale about facing our fears, embracing death and human frailty, walking in wonder and returning home as transformed beings.

Director Tomm Moore fashioned The Secret of Kells, a marvelous animated movie centered around the masterwork of Christian devotion from the ninth century known as The Book of Kells. That Irish production was nominated for an Academy Award in the Best Animated Feature category, and we selected it as one of the Most Spiritually Literate Films of 2010. The two-dimensional hand-drawn animation was peppered with traditional Celtic symbols amidst swirls, spirals, and vivid lush scenes of light and dramatic haunting scenes of darkness; some parts look like they jumped out of the pages of the book.

In Song of the Sea, Moore has turned to Irish folklore for this story about Selkies, mystical seals that could transform into human beings. These tales often provided solace to those who lost loved ones to the sea. In the press notes, Moore notes that "a seanachai is a traditional storyteller in Ireland who learns the stories from the old generations and passes them on to the next." Here the filmmaker plays that role, aided by the melodic music of composer Bruno Coulais and the Irish folk band Kila. The voices of the characters of this animated feature are provided by Brendan Gleeson, Fionnula Flanagan, David Rawle, Lisa Hannigan, Pat Shortt, and Jon Kenny.

Young Ben and his silent little sister Saoirse are growing up in a lighthouse with their father; their mother was lost to the sea when the girl was born. She left a sea shell with Ben. When Saoirse picks it up and blows into it like a flute, magical things begin to happen. Soon the children have embarked on a quest accompanied by their sheepdog named Cu. Will they find out what happened to their mother? Along the way, they encounter fairies, ancient sea gods, and a witch.

Like its predecessor, this film is stunning visually. The land and seascapes appear as watercolors come to life. Some scenes are layered so skillfully that in the play of light and dark, we are not quite sure what we are looking at. We find ourselves pulled into the beauty of the sea and the warmth of home.

Like other folktales from other cultures, Song of the Sea challenges us to face our fears, embrace death and human frailty, walk in wonder, and return home as transformed beings. 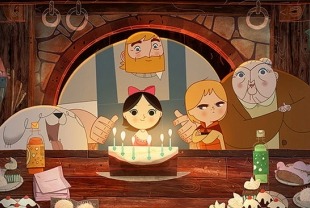 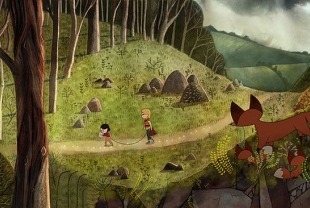 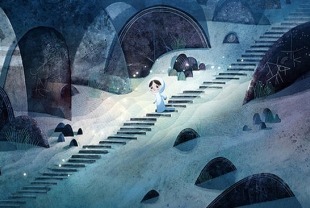 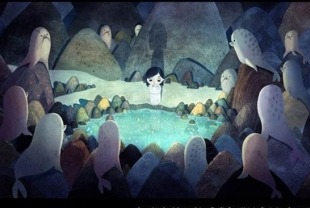