Directed by Shinji Aoyama
The healing journey of three survivors of an attack on a municipal bus in Japan, described by its director as a prayer for modern people searching for the courage to go on.

Japanese director and writer Shinji Aoyama has called this nearly four-hour black-and-white film "a prayer for modern people searching for the courage to go on." It was created in the context of the recent sarin gas attack in the Tokyo subway and a series of violent crimes in Japan. Eureka demands patience and an emotional openness to the minimal and subtle messages of diminishment and loss of faith. Yet, make no mistake, Aoyama believes in the healing powers of love, especially the tender nurturing care of a sensitive soul who is himself on the path of reconnecting with life.

In the opening scenes, a deranged man hijacks a municipal bus, killing several of the passengers as two schoolchildren, Naoki (Masaru Miyazaki) and Kozue (Aoi Miyazaki), a brother and sister, look on in frozen terror. When the gunman steps off the bus with the driver Makoto (Koji Yakusho) as his shield, the police surround him. The murderer is executed by a sharpshooter. But the three survivors sink into a numbed state of shock and disorientation.

Two years pass and Makoto returns home, learning that his wife has left him. Naoki and Kozue's mother has abandoned them, and their father has died. Continuing on in chaos and silence — they don't speak at all — they live in a large house with the insurance money paying their bills.

After Makoto's brother accuses him of being the murderer responsible for a series of killings in the area, the former bus driver moves in with the two children and becomes their caretaker. Later, Akihiko (Yohichiroh Saitoh), a 21-year-old cousin, arrives on the scene and rounds out this makeshift family.

Instead of remaining in isolation, Makoto purchases a bus and starts the healing process by visiting the site of their mutual trauma. Then on the road, the vehicle that once was their ticket to hell becomes a womb for their rebirth: Makoto breaks through Kozue's catatonic state by knocking on the wall of the bus: she responds. It is a new beginning for both of them. They have to face one more trauma before repeated immersion in the beauty of the natural world begins to serve as a healing balm.

Eureka beautifully proclaims that love, play, patience, and movement can be soul boosters, capable of helping the walking wounded return to the land of the living. 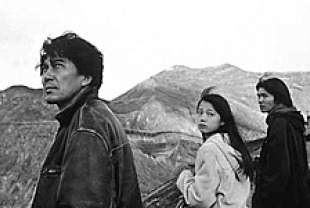