Directed by Baz Luhrmann
An extravagant musical drama with stunning visuals that celebrates l'amour as an emotion that is at once transcendent and transforming.

According to Australian writer and director Baz Luhrmann, romantic love is the predominant creative experience available to most of us. In Strictly Ballroom, he told the involving story of two daring dancers who broke through to another level of their art and in their relationship by not giving in to their fears. In his imaginative screen interpretation of William Shakespeare's Romeo and Juliet, he explored how romantic love acts as a catalyst for change by separating us from the past and setting us on a new course. In this extravagant musical drama set in Paris in 1899, l'amour is celebrated as an emotion that is at once transcendent and transforming.

From the clever theatrics involving the film company's logo in the beginning to the nod to the silent film era at the end, Luhrmann makes use of the ample resources of cinema, theatre, dance, and contemporary pop music to explore the delirium of love and all of its insatiable hungers. The sounds, the sets, the costumes, and the use of the latest computer technology are right in sync with this musical drama's presentation of passion as a force that unleashes primitive urges and fantasies.

"The greatest thing you'll ever learn is to love and be loved in return," writes Christian (Ewan McGregor), the narrator who is memorializing his torrid affair with Sadine (Nicole Kidman), Montmartre's most delicious courtesan and the star of the Moulin Rouge. Through flashbacks, we see how he was first saw her perform when taken to the famous club by Toulouse-Lautrec (John Leguizamo). He and his fellow bohemians want to put on a musical starring Sadine. They are convinced Christian is just the writer they need when he comes up with the line: "The hills are alive with the sound of music." At the meeting with Sadine, he sings her Elton John and Bernie Taupin's "Your Song" and promptly falls madly in love. First flattered, then intrigued, she soon joins him in a musical collage of love songs that has the film's audience sighing in recognition of familiar phrases.

Christian's competition for Sadine's company comes from a rich and powerful Duke (Richard Roxburgh) who has signed a contract with Moulin Rouge owner Zidler (Jim Broadbent) to invest in the musical. They hope it will serve as a launch pad for the nightclub's venture into legitimate theatre. In one of the movie's most entertaining numbers, Zidler sings his own twisted version of Madonna's "Like a Virgin" to convince the Duke that Sadine can be his. Also check out the tango version of Sting's "Roxanne" where all the furies of jealousy are depicted in a dance number for the show and in Sadine's encounter with the Duke in her sumptuous boudoir.

If you believe that love always gives us one more chance, then Moulin Rouge is meant for you. If you are convinced that love is both a storm and a safe harbor, then all the theatrics on the screen will send shivers up and down your spine and put a smile on your face. If you're not ashamed of having been a lovesick puppy then Christian's creed will make perfect sense to you: "Love is like oxygen, it's a many splendored thing, it lifts us up where we belong, all you need is love." And if all this romanticism describes you — well, then what are you waiting for? Moulin Rouge is ready to make you glow. Go and glow. 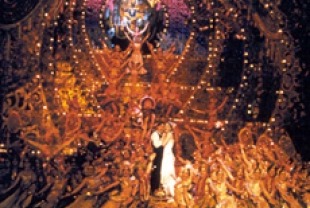