Directed by Andrew Adamson, Vicky Jenson
A witty and heart-warming animated comedy about some lovable losers who prove that inner beauty is the true asset in a world where quick judgments all too often cause untold pain.

Andrew Adamson and Vicky Jenson, the directors of this spiffy animated comedy, have hit the jackpot with a story about some lovable losers who will connect with people of all ages. Loosely based on the 1990 illustrated children's book by William Steig, it follows the ancient quest motif where a knight must rescue a princess from a castle surrounded by a moat and an angry dragon.

Only in this witty tale, everything is turned inside out with surprises abounding at every turn. Shrek (voiced by Mike Meyers) is an ugly green ogre who enjoys living alone in a swamp. When he suddenly finds his private space overrun by fairy tale squatters including the three blind mice, Snow White and the seven dwarfs, Pinocchio, and others, he stomps off to see Lord Farquaad (John Lithgow), a pint-sized egomaniac who desperately wants to be king. This nasty little fellow comes up with the grand idea of sending Shrek on a mission to save the princess trapped in the castle tower.

In this very humorous comedy, Shrek's Don Quixote has his Sancho Panza — a talking donkey played by the slap-happy and loquacious Eddie Murphy. The rescue operation goes well after the fire-breathing dragon develops the hots for the donkey. Meanwhile, Fiona (Cameron Diaz) turns out to be a most unusual princess, a tough cookie with a big secret.

Shrek is this year's Chicken Run with a smashing assortment of innovative bits, slapstick sequences, and a bevy of pop tunes that hit the right spot at just the right moment. The background settings and the expressive faces of Shrek and all the animal characters are top-drawer. Whereas Chicken Run celebrated the Holy Grail of freedom, this zesty tale extols the importance of inner beauty in a world where quick judgments all too often cause untold pain and loneliness. Shrek is a creative lark from start to finish. 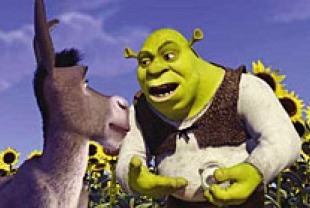