Directed by David Siegel, Scott McGehee
An unusual film noir drama about a mother who must use all her will power and intuitive resources to keep her son from harm.

There are many excellent films about the spiritual practice of transformation in which an individual's life is turned around to a more meaningful direction — movies such as Phenomenon, Ulee's Gold, or Central Station. This unusual film noir drama written and directed by Scott McGehee and David Siegel is adapted from a novel by Elizabeth Sanxay Holding. It is about a mother who is forced to use all her willpower and intuitive resources to keep her child from harm in some dire circumstances.

Margaret Hall (Tilda Swinton) is the head of a Lake Tahoe household consisting of her seventeen-year-old son Beau (Jonathan Tucker), two younger kids, and her father-in-law (Peter Donat). Her naval officer husband is away at sea most of the time. Concerned about Beau's friendship with Darby (Josh Lucas), a nightclub owner in Reno, she goes to see him and warn him to stay away from her son. Shortly afterwards, Margaret discovers Darby's body on the bank of the lake near her home with an anchor through his chest. With all the fierceness and purposefulness of a mother grizzly protecting her threatened cub, she moves Darby's body along with his car.

Convinced that all is well, Margaret is stunned when she finds herself blackmailed by Alek Spera (Goran Visnjic) whose boss Nagle (Raymond Barry) wants $50,000 for a video of Beau having sex with Darby. Trying to raise all that money on short notice proves to be impossible given all the daily chores she must attend to. Things are complicated further when her father-in-law has a heart attack. Luckily Alek is on hand to save his life.

McGehee and Siegel draw out a richly nuanced performance from Tilda Swinton (Orlando) as Margaret, an isolated woman whose life turns into a nightmare forcing her to step outside the boundaries of her prescribed suburban existence. The mysterious finale leads us to wonder whether her transformation will be lasting or just a temporary adventure brought on by circumstances beyond her control. One thing is for sure: the spiritual transformation of Alek is genuine and life-altering. 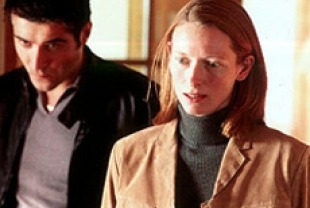 R - some violence and language, a strong sex scene