O Brother, Where Art Thou?

Directed by Joel Coen
A zany and hilarious bluegrass version of Homer's Odyssey set in the South during the Depression where three escaped convicts go in search of one treasure and find another they didn't expect.

Three convicts escape from a Mississippi chain gang in the 1930s — they are Ulysses Everett McGill (George Clooney), a smooth-talking petty criminal; Delmar (Tim Blake Nelson), a good ole boy from a farm; and Pete (John Turturro), a sourpuss with a negative take on everything that happens. The plan is to recover the 1.2 million dollars Everett claims to have hid after an armored car robbery. At the start of their quest, they meet a blind prophet who tells them: "You will find a fortune but not the fortune you seek." Not too swift, these three don't get it — not even when his words come true.

On their zigzag journey toward freedom, the convicts meet up with a ragtag band of colorful characters: Pete's double-dealing cousin (Frank Collison); Tommy Johnson (Chris Thomas King), an African-American musician who has sold his soul to the devil at a crossroads; Babyface Nelson (Michael Badalucco), a boisterous gangster and gunman; and Big Dan Teague (John Goodman), a nasty, one-eyed Bible salesman.

Joel Coen directs this zany and very funny bluegrass version of Homer's The Odyssey. The title is taken from Preston Sturges's 1941 film Sullivan's Truths about a Hollywood director who yearns to make a social-problem picture called O Brother, Where Art Thou? The screenplay by Ethan Coen and Joel Coen is a rollicking collection of comic bits, Southern folklore, slapstick stunts, cinematic tributes, religious ritual, political satire, and depression era commentary.

Everett provides a steady and clever exposition on their adventures, while keeping his hair neat with "Dapper Dan" gentleman's pomade. Two of their escapades lead them into a close encounter with three sirens by a river and then with an evil KKK gathering. In their third and final adventure, the threesome find themselves caught up in the re-election campaign of Governor Pappy O'Daniel (Charles Durning). His reform opponent is Homer Stokes (Wayne Duvall), who is traveling around the state with a midget carrying a broom to symbolize how he stands for the little guy and will sweep up all the corruption. It is on this last leg of their journey that Everett lets his buddies know the real point of his escape from prison.

O Brother, Where Art Thou? is a wild and wooly comedy that establishes the Coen brothers as one of the truly inventive forces in American independent filmmaking. And by the way, hats off to T-Bone Burnett for the inspired hillbilly music that propels this outrageous odyssey. 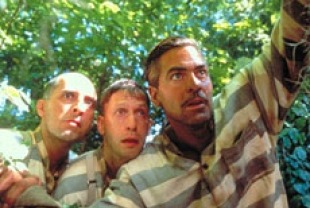