Directed by Iain Softley
A well-acted and spirited sci-fi drama with the message that we can all be medicine for one another if we only have eyes to see how.

In Little Stone, James Wanless writes: "Every meeting in our lives happens for a higher purpose; every meeting is a chance for evolution. We should always ask ourselves how we can grow from our associations and friendships. This makes our connections and partnerships far more meaningful and empowering."

Being open to new teachers in our lives is an important spiritual practice. It challenges us to be vigilant and to set aside our preconceived notions about who can and cannot guide, help, or heal us. Sometimes the best teachers come in very strange guises, as in K-PAX, a well-acted and spirited science fiction drama based on a 1995 novel by Gene Brewer.

Prot (Kevin Spacey) arrives in New York City's Grand Central Station and, when he sees a woman being mugged, he immediately goes to help her. The police arrive and haul him away after he tells them he's from another planet. Sometime later, Prot is taken to the Psychiatric Institute in Manhattan. Dr. Mark Powell (Jeff Bridges) is intrigued by this articulate fellow who wears sunglasses to protect his sensitive eyes. Prot claims to be from K-PAX, a planet 1,000 light years away. Why is he here? Curiosity, the sheer delight in checking out Earth.

As their therapy sessions proceed, Powell becomes fascinated with Prot's descriptions of K-PAX as a place without families, lawyers, or guidelines for behavior. This alien believes that Earth civilization is at an early stage of evolution and at one point even says, "Sometimes it's hard to imagine how you've made it this far." Prot is especially baffled by the human propensity for violence and the embrace of an eye-for-an-eye philosophy that goes against the witness of the founders of both Buddhism and Christianity.

While his superior, Claudia Villars (Alfre Woodard), doesn't have much patience for Powell's obsession with Prot, he declares him to be "the most convincing delusional I've ever come across." Even more impressive is the positive effect this outsider has upon other patients in the institute including Howie (David Patrick Kelly), an obsessive compulsive personality; Ernie (Saul Williams), who's phobic about germs; Sal (Peter Gerety), who finds everyone's smell to be offensive; Mrs. Archer (Celia Weston), a recluse; and Bess (Melanee Murray), who's locked in her own world of torment and silence. When these patients learn that Prot intends to return to K-PAX and that he's only going to take one human with him, each yearns to be the chosen one. To them, he's become a Jesus-like holy person, giving them hope and the courage to heal.

Convinced that his favorite patient is hiding some terrible trauma from the past, Powell invites him to a family celebration over the July 4 weekend. This is after Prot's mind-boggling performance in front of the doctor's friend Steve (Brian Howe) and some other astrophysicists in which he demonstrates the orbital path of K-PAX in a distant galaxy. At the party, Prot psychically communicates with the Powell's dog, much to the astonishment of the children. In a moment alone with Rachel (Mary McCormack), Powell's wife, he learns that the good doctor is not talking to his estranged son from his first marriage.

The breakthrough Powell is looking for happens when Prot is accidentally sprayed by some water at the party and reacts violently. But he is not able to get any explanation for this behavior out of Prot. As the time approaches when this extraterrestrial claims he will beam back to K-PAX, Dr. Powell intensifies his efforts to uncover the secrets of his past through hypnosis and some amateur detective work.

Iain Softley (The Wings of the Dove) directs from a screenplay by Charles Leavitt (The Mighty). Kevin Spacey and Jeff Bridges deliver convincing performances. The overarching theme of this sci-fi drama is that we all can be medicine for one another. But to see that, we have to set aside the dualisms that keep us trapped in old distinctions such as us and them, doctors and patients, intellectuals and ordinary folk. Perhaps the best advice in the film is the parting wisdom Prot gives to Howie: "Stay here and be prepared for anything." 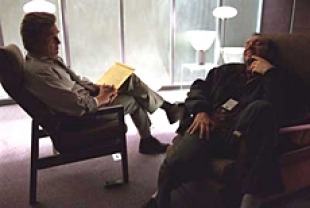