Directed by Terry Gilliam
Retools the myth of the Holy Grail in an uplifting modern story of transformation and the universal search for wholeness.

The myth of the Holy Grail dates back to the twelfth century, yet it clearly speaks to the contemporary world. In The Fisher King, screenplay writer Richard LaGravenese retools this medieval legend by setting it in modern day New York City. Director Terry Gilliam (Time Bandits, Brazil, The Adventures of Baron Munchausen) innovatively taps into the many moods and milieus of the city.

Jack Lucas (Jeff Bridges) is a cold, calculating shock radio disc jockey in New York City whose greed and egotism have cut him off from the rest of humanity. When a deranged man murders seven people in a bar after hearing one of his on-air tirades against yuppies, the seemingly unperturbable celebrity plunges into a dark pit of alcoholism and depression.

Jack finds sanctuary with Anne (Mercedes Ruehl), a strong-spirited woman who runs a video store. However, there is no end to his guilt until he meets Parry (Robin Williams). He is a former medieval history professor who has been unhinged by grief over the death of his wife in the bar shooting.

At first, Jack doesn't know what to think of this half madman/half fool who claims he is a knight on a quest and is being pursued by a Red Knight only he can see. Then Jack realizes that if he can restore Parry to his former life, he might be able to assuage his own guilt.

Part of this reclamation project involves bringing Parry together with Lydia (Amanda Plummer), a shy accountant he loves from afar. The ante is upped when another mishap befalls Parry and Jack must retrieve what his friend perceives to be the Holy Grail from a millionaire's mansion on Fifth Avenue.

Jeff Bridges and Robin Williams are convincing as two wayward souls who meet when they are both at the end of their ropes. Like the Fisher King, they are wounded and suffering. Then through caring and a few good deeds, they transform each other.

The performances by Bridges and Williams are high-wire triumphs where each actor contributes to the other's dazzling leaps and somersaults. In support roles, Mercedes Ruehl is delightful as Jack's girlfriend Anne, and Amanda Plummer is extraordinary as the object of Parry's devotion: the eccentric Lydia.

The Fisher King bears witness to the universal search for wholeness. It also speaks forcefully to the longing for spirituality afoot in our land. We all carry wounds as deep and unyielding as Jack's guilt and Parry's grief. Through the miracle of grace, we too can be released from our private torments. 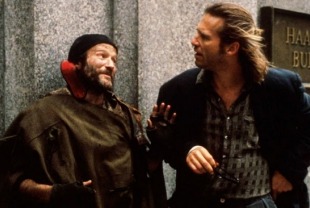