Directed by Wes Anderson
A quirky tale which revolves around a prankster father who wants to reconnect with his children and former wife.

Anthony Brandt has written: "The most powerful ties are the ones to the people who gave us birth . . . it hardly seems to matter how many years have passed, how many tragedies there may have been, how much misery in the family; we remain connected, even against our wills."

In his wonderful coming-of-age film Rushmore, director Wes Anderson demonstrated a quirky respect for the idiosyncrasies of difficult people. Now in The Royal Tenenbaums, he and co-writer Owen Wilson have created one of the most colorful and cantankerous families in screen history. Their flaws and follies are very funny and touching at the same time.

In the opening scenes of this rambunctious family drama, narrator Alec Baldwin sums up the eccentric accomplishments of the children of Royal (Gene Hackman) and Etheline (Anjelica Huston) Tenenbaum: Chas (Ben Stiller), a financial wizard who made a fortune breeding Dalmatian mice; Margot (Gwyneth Paltrow), who won a grant for playwriting in the ninth grade; and Richie (Luke Wilson), a tennis champion who threw his career away in a mid-match breakdown. Etheline, an archaeologist, divorced her husband when the children were young because of his infidelities. Now she is being courted by Henry Sherman (Danny Glover), her mild-mannered bridge partner and accountant.

Royal, a former litigator who was brought down years ago by Chas and sent to prison, feels that during his last stage of life he wants to reconnect with his family. He comes up with an outrageous scheme of feigning illness after he's kicked out of the hotel where he has been living. However, his children don't buy his change of heart towards them after 17 years of indifference. Margot, who's married to writer and neurologist Raleigh St. Clair (Bill Murray), can't forgive Royal for never letting her forget that she was adopted. Chas desperately tries to keep him away from the two sons he's raising alone since the death of his wife. Royal secretly gets through to the kids by taking them on several prankster adventures.

Richie is the only one who seems to evidence any feelings of closeness for his dad even though the former tennis star is still struggling with the love he secretly harbors for his adopted sister. When Richie finds out that she had an affair with Eli Cash (Owen Wilson), the Tenenbaums's next door neighbor who is now a novelist and drug addict, he tries to commit suicide.

The Royal Tenenbaums takes family drama into fresh and hilarious new territory with these wacky characters and their bumbling attempts to come to terms with love, forgiveness, and respect. Anderson draws out a robust performance from Gene Hackman as the irrepressible and irresponsible Royal, a man whose attempts to make amends for the past are commendable. The rest of the impressive cast seem to have had a lot of fun participating in this inventive comedy. In the end, Royal has the last laugh, as he should, given the energy he expends in reuniting with his estranged clan.

The two-disc DVD release includes a “making of” video diary that follows the director through all stages of the production, interviews with all the stars, and several galleries of stills, including one showing young Richie’s paintings. 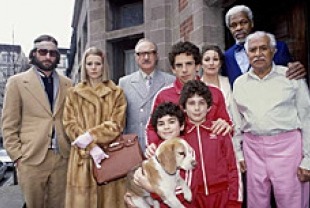