Directed by Lone Scherfig
A Danish romantic comedy that provides a soul-satisfying anatomy of the different shades of loneliness and the universal yearning for love.

Louise Bernikow has described loneliness as "a tumbleweed feeling, drifting along, disconnected, surrounded by empty space." All of us, at one time or another, have experienced this hunger for intimacy and companionship. Italian for Beginners, a Danish romantic comedy directed by Lone Scherfig, provides a soul-satisfying anatomy of the different shades of loneliness and the universal yearning for love and connection.

Andreas (Anders W. Berthelsen) is a thirty-something minister who has been hired to serve as a temporary replacement for a burnt-out clergyman in a Copenhagen suburb. This widower, who drives a Maserati, stays at a hotel managed by Jørgen (Peter Gantzler). The latter is a mild-mannered fellow who has been sexually impotent for four years. He is attracted to Giulia (Sara Indrio Jensen), an Italian cook who works in the hotel restaurant. But a lack of self-confidence keeps him from asking her out.

Jørgen's best friend is Hal-Finn (Lars Kaalund), a feisty sports buff who is fired at the restaurant for insulting patrons. However, when he meets Karen (Ann Eleonora Jørgensen), a hairdresser, he suddenly becomes very courteous.

Karen is caring for her terminally ill mother who eventually must be hospitalized. Her last act of love for this woman, who has nothing but criticism for her, is quite a surprise. Then Karen finds out that she is related to Olympia (Anette Støvelbaek), a clumsy and shy woman who works at a bakery.

Writer and director Lone Scherfig brings all of these lonely souls together at an Italian language course offered by the local town council. After the teacher dies of a heart attack, Hal-Finn takes over. It turns out that he has a flair for the language picked up as an avid fan of an Italian soccer team. Scherfig has created a bona fide celebration of the healing powers of love by showing the wonders it works in the lives of these men and women from Copenhagen. 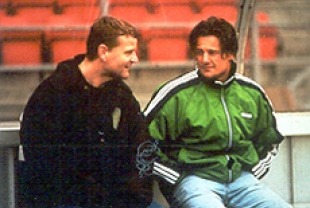