Directed by Maria Florio, Victoria Mudd
An unsettling documentary about the U.S. government's assault on Navajo and Hopi people during the 1970s in an attempt to gain access to the resources beneath the earth on their sacred land.

This powerful and unsettling film won an Academy Award in 1985 for Best Documentary Feature. Maria Florio and Victoria Mudd present a scathing overview of the shameful treatment of Native Americans during the 1970s. The forced relocation of 12,000 Navajo Indians from their lands in northeast Arizona was set in motion by the greed of energy consortiums eager to have access to the oil, gas, uranium, and coal on the sacred lands of these peoples.

Broken Rainbow reveals that this harrowing incident was another in a long string of efforts by the United States government to break the spirit of Native Americans by seizing their property. Both the Hopis and the Navajos, according to the filmmakers, have a tradition of seeing themselves as caretakers of the Earth. That is why the effort to move them off their land in the 1970s was so offensive. It rivaled another forced relocation — the internment of their ancestors in camps years earlier.

Narrator Martin Sheen states: "There is no word for relocation in the Navajo language; to relocate is to disappear and never be seen again." This documentary shows the dire effects upon Hopis and Navajos as their livestock are reduced and their plants bulldozed. One Native American woman laments: "It seems our future has been beaten out of us with a stick." She's right, of course, since most of these families were never given a fair share of the huge profits gained from mining their lands.

Although Broken Rainbow covers events leading up to the early 1980s, it tells a grim and terrifying story that is still unfamiliar to most Americans. In the name of progress, the federal government and corporate America have treated Native Americans like sub-humans, violated their sacred lands, and tried to obliterate their culture. But miraculously, courageous Indians still remain to carry on the rituals and ceremonies of the past. No reservations, fences, or relocation programs can contain the noble spirit of these native peoples. This message is beautifully conveyed in an original song created by Laura Nyro for Broken Rainbow.

The film can be streamed for free from YouTube. 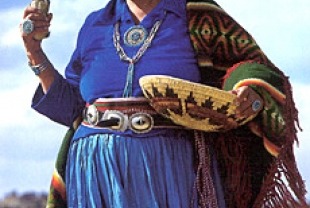