Raiders of the Lost Ark

Directed by Steven Spielberg
A rip-roaring adventure story with a hero of epic proportions.

Some movies are very special in that they compel us to live only within the images we see on the screen. The story must be engaging, the characters interesting, and the action nonstop. George Lucas, creator of the successful Star Wars saga, and Steven Spielberg, director of the magical Close Encounters of the Third Kind, have collaborated on Raiders of the Lost Ark, one of the best screen entertainments of 1981.

The tale is set in 1936. Indiana “Indy” Jones (Harrison Ford) is an archaeologist with oodles of charm and a yen for adventure. In the opening scene of the film, he is looking for a golden statue in a Peruvian Indian temple. The place is booby trapped with poison darts, hundreds of tarantulas, stone doors with steel teeth, and a mammoth rolling boulder designed to put the finishing touches on anyone who escapes the aforementioned hazards. Indy makes it out alive only to have the treasure taken from him by a nefarious French archaeologist named Belloq (Paul Freeman).

Steven Spielberg is a director who knows that most audiences evaluate movies mainly as sensory experiences. They want to be thrilled. This opening scene is one of the most exciting visual rides you'll ever experience. The cliffhanger formula — Indiana facing repeated death-defying obstacles — is used throughout the film. Raiders of the Lost Ark has the ingenuity of an old Saturday afternoon serial.

Back in the United States, two Army intelligence experts pay a visit to Jones at the University where he teaches. They have learned that Adolf Hitler is searching in Egypt for "the Lost Ark of the Covenant," a gold-encrusted chest purported to contain fragments of the tablets of the Ten Commandments. The Fuhrer and his cohorts believe that the possessor of this treasure will have invincible powers and a "radio to God." The U.S. Army wants Jones to find the Ark before the Nazis do.

Indy's first stop is Nepal where he picks up Marion (Karen Allen), a feisty former lover who is the daughter of his mentor, a famous archaeologist. In the saloon she runs, they square off against a squad of crazed Nazis. Later, in the Middle East, they team up with Sallah (John Rhys-Davies), a savvy fellow who is able to get them into the area where the Germans are digging under Belloq's supervision.

Raiders of the Lost Ark echoes a variety of movie genres, from Westerns to swashbucklers to fantasies and epics. Lucas and Spielberg treat this familiar lore with affection rather than condescension. The film is a bargain basement of chase sequences, exotic settings, love interests, turnabouts, reprisals, and rollercoaster-like perils. Harrison Ford as the hero of epic proportions has never been better. Karen Allen is exuberant as a seductive, quick-witted, hard-drinking brawler; and Paul Freeman comes off as an especially slimy aristocratic villain. Enjoy! 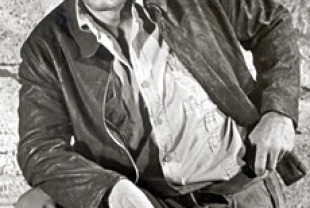