Los Angeles in the late 1940s. A city where everybody has — or is trying to get — something on everyone else. Tommy Spellacy (Robert Duvall) is a middle-aged veteran detective. Years ago, he was on his way to big things in the police department when someone let it out that he was the bag man for payoffs to the Vice squad. Now, Tommy is a hardboiled cynic with a quick wit who is satisfied just to keep one step ahead of the game. He and his chatty partner Frank (Kenneth McMillan) are trying to solve the murder of Lois Fazenda, a would-be actress whose body was found split in half in a vacant lot.

Tommy's brother, The Right Reverend Monsignor Desmond Spellacy (Robert De Niro), is traveling in the fast lane: he's the hand-picked successor to the diocese's Cardinal. He functions as a "lightning rod, hatchet man, and accountant." Among Des's responsibilities: saving face for the diocese when a priest has a heart attack and dies in a brothel, forcing the cranky and outspoken Monsignor Seamus Fargo (Burgess Meredith) to retire, and dealing with the financial machinations of Jack Amsterdam (Charles Durning), a pillar of the Catholic community who has an unsavory past, an itch for money, and a yearning for absolution.

The case of the "Virgin Tramp," as she is dubbed by the press, draws the two Spellacy brothers together in a sibling dance of rivalry. Both have a finely developed Irish sense of sin, and each of them realizes that the institutions they work for trade in favors in order to achieve their high-minded ends. Eventually, the ripples from the murder case wash up on Desmond's door and Tommy refuses to look the other way.

True Confessions is based on the 1977 novel by John Gregory Dunne. He and his wife, Joan Didion, have written a masterful screenplay that is at once witty, metaphysically rich in nuances, and studded with brilliant characters. Sleuthing and the sacraments, Cain and Abel, crime and confession have more in common than is often admitted. This movie spells out the connections in a compelling way.

Director Ulu Grosbard (Straight Talk) makes the most of production designer Stephen Grimes and art director Steward Campbell's colorful recreation of Los Angeles during the 1940s. Robert Duvall puts in a performance that proves he is one of America's premier actors. With great precision, he conveys the detective's pent-up anger, disappointment in life, and cynicism — feelings that are all revealed during his meetings with his successful brother. Robert De Niro's depiction of Des is understated but convincing.

The film also boasts a handful of strong character portraits — Rose Gregorio, whose burnt-out madam is touching and sad; Kenneth McMillan as Tommy's seasoned partner; and Cyril Cusack as Des's smooth-talking and political superior. True Confessions was one of the best films of 1981. 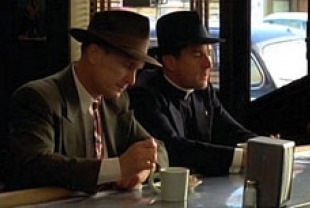