Much Ado About Something

Directed by Michael Rubbo
A fascinating literary mystery story with multiple strands about the controversy of who really wrote Shakespeare's plays.

Australian writer and documentary director Michael Rubbo believes there are plenty of reasons why you could think that William Shakespeare isn't the real author of all the works attributed to his name. Or as Dolly Walker Wright, who has explored the subject extensively, puts it: "Here is the greatest cover-up job in history." At the heart of the controversy is the fact that the famous bard never continued his education past secondary school; so how could he have written such stunning poetry and prose on so many subjects?

The answer, according to the late Calvin Hoffman, author of The Murder of the Man Who Was Shakespeare, is that he didn't. Then who is the mystery man? Many believe it is Christopher Marlowe, an erudite Cambridge scholar who was born in the same year as Shakespeare and was the author of many plays including Dr. Faustus. Members of the Marlowe Society try to make a case that their man was a spy being persecuted as a free thinker. In order to escape the clutches of the English Inquisition, he set up a fake death in a pub and fled to Italy. From there he fed plays to Shakespeare who got them staged. Members of the Marlowe Society point to all the material set in Italy in Shakespeare's dramas, even though he never traveled there, and the repeated theme of exile in his sonnets.

Much Ado About Something is a fascinating literary mystery story with multiple strands presented through interviews with scholars and amateurs, clips from Shakespeare movies, readings from Dr. Faustus and a sequence where two actors put on display the parallels in Shakespeare's and Marlowe's writings. Most impressive of all, Mark Rylance, artistic director of Shakespeare's Globe Theatre in London, admits his doubts about the bard's authorship of his plays. 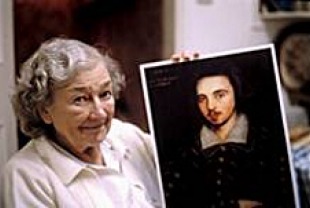