Son of the Bride

Directed by Juan Jose Campanella
A heartwarming comedy about the personal transformation of a middle-aged man, thanks largely to the example of his very romantic parents.

"Are there schools for forty year olds to prepare them for the second half of life?" Carl G. Jung asked years ago. Oftentimes, our experiences are the best teachers. Many middle-agers find themselves ravaged by doubt and exhaustion at this transitional stage of life. Some wrestle with grandiosity while others confront burnout. Most desperately want to break out of the prison of habit but lack the will power to do so. It may take a tragedy to push them on the path of transformation.

Rafael Belvedere (Ricardo Darin) is a 42-year-old owner of a restaurant started years ago in Buenos Aires by his father. The daily pressures have gotten to him and often all he wants to do is go home and watch reruns of old Zorro movies on television. His ex-wife (Claudia Fontan) is upset that he hasn’t taken any time to get to know his teenage daughter Vicky (Gimena Nobile). And his attractive girlfriend Nati (Natalie Verbeke) is anxious that she has no prominence in his priorities. Meanwhile, Nino (Héctor Alterio), Rafael’s father, wants to give his wife (Norma Aleandro) the big church wedding she’s always dreamed of, even though she is now living in a home and suffers from Alzheimer’s disease. He wants his son to help pay for their renewal of vows ceremony.

All these pressures converge on Rafael and he has a heart attack. It slows him down and creates the space he needs to ask himself some hard questions. Does he want to manage the restaurant or should he sell out? Is this the right time to chuck it all and move to a ranch in Mexico? What about his parents? Why is he still uncomfortable with his mother and her harsh evaluation of him? Just to add more fuel to the fire, Juan Carlos (Eduardo Blanco), a childhood friend who’s now an actor, reappears in his life. He’s trying to start afresh after a personal tragedy.

Juan José Campanella directs this comedy, which is Argentina’s entry for the Best Foreign Language Academy Award. Rafael’s transformation is given a boost by the love that still blooms between his elderly parents. Hector Alterio as Nino steals the movie with his touching portrait of an ardent romantic whose devotion to his wife knows no limit. Some of his passion is caught by Rafael as he renegotiates his commitment to Nati and comes up with a surprising way out of his middle-aged malaise. The Son of the Bride is a heartwarming story about personal transformation that is consistently fresh and funny. 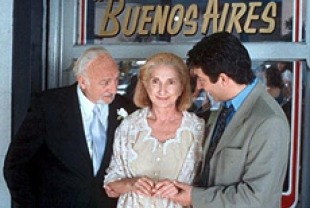