Directed by Chuck Davis
A one-hour documentary by Chuck Davis about his quest at the midpoint of his life to understand the Jewish path.

Although raised as a Jew, Chuck Davis admits the religion didn't stick. He turned for meaning and practice to Buddhism for 20 years. Then at midlife, which coincided with the birth of his first son, he decided to take a hard look at Judaism. Davis began this quest armed with a handful of serious questions.

He found a patient and wise teacher in Rabbi Zalman Schachter-Shalomi, founder of the Jewish Renewal Movement. The documentary presents his responses to Davis's questions about the use of Hebrew, the relevance of the Torah to modern life, Jewish meditation, the value of prayer in a secular society, the need for Jewish laws in a post-modern world, and the challenges of interfaith marriage (Davis is married to a former Lutheran).

Schachter-Shalomi doesn't have to answer all the questions himself. Davis also talks to other rabbis who speak eloquently about the faith. Jonathan Omer-man celebrates Jewish mysticism and the importance of silence in the spiritual life. Tirzah Firestone leads several rituals and revels in the richness of the Jewish holidays. David Zeller salutes the courage of interfaith couples who are pathfinders in the twenty-first century world of religious pluralism and hybrid forms of faith. Marcia Prager opens up her heart while discussing the significance of an intimate relationship with God. And Michael Lerner pays tribute to partnership we all have with the Holy One in healing the world.

Rabbi Schachter-Shalomi's describes the Jewish Renewal Movement as "practicing generic religion with a Jewish flavor." It is this flexibility, openness, and hospitality that makes this brand of Judaism so palatable to seekers of all stripes. Here the emphasis is working for the well-being of the planet rather than merely advancing the tribal solidarity of the few. 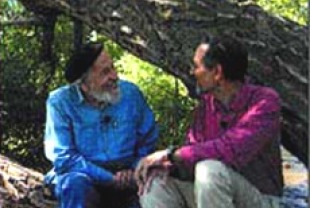