The Back of the World

Directed by Javier Corcuera
An extraordinary documentary about three individuals whose lives have been marred by economic, political, and social injustices.

There are so many poor, persecuted, and downtrodden individuals in the world whose stories are never told. Yet to be truly engaged in our global society, we must become sensitive to their pain, suffering, and despair. Peruvian filmmaker Javier Corcuera has made an extraordinary documentary about the lives of three individuals from different cultures who reside as marginal souls in "the back of the world." They are victims of economic, political, and social injustices.

The first story, "The Child," revolves around an 11-year-old Peruvian boy, Guinder Rodriguez who gets up at 6:30 every morning to work all day breaking stones with a sledgehammer in the hills outside Lima. It is arduous and back-breaking work for a little boy and yet he feels obligated to help his poverty-stricken family. Guinder wants to be an accountant when he grows up but he may end up like the 70-year-old man who works alongside the boys quarrying stones.

The second vignette is "The Word." In Stockholm, Sweden, 60-year-old political refugee Mehdi Zana, a former mayor of a Kurdish town, reminisces about his struggles with the Turkish government who jailed him for 16 years. He talks about the unjust treatment of his stateless people. He salutes the courage of his wife Leyla who was the first Kurdish woman elected as a member of Parliament in Turkey. However, when she spoke out in her native language during the swearing-in ceremony, she was put in prison. Leyla, now serving a 15-year sentence, has become a hero to the Kurdish people.

In "Life," the final section of The Back of the World, we meet Thomas Miller-El, whose execution in Texas has been stayed ten times since 1986. This African-American, who claims to be innocent of the crime for which he was given the death penalty, has been in hell, and nothing can ease his pain. Miller-El talks about some of the 120 people he’s known who have been executed. Tomas Rangel, a Mexican who emigrated to the United States 40 years ago, shares what it’s like to plead for his grandson who has been given a date for his execution. Meanwhile, several prison professionals, including a chaplain, try to make a case for a caring attitude toward those who are due to die by lethal injection.

The Back of the World is a deeply spiritual documentary that reveals the sacred responsibility we have to cherish the lives of all people — no matter what their background, economic status, race, creed, or deeds. The conclusion the compassionate viewer draws from this powerful film is that we must work to build a better world where the worth of every individual is recognized. Rodriquez’s documentary engages our sense of justice and spurs us on to a fresh sense of our unity with all suffering people. 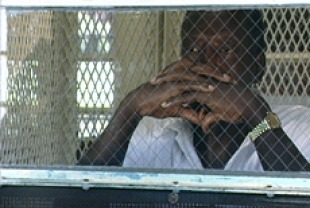