From the Heart of the World: The Elder Brothers' Warning

Directed by Alan Ereira
A documentary about a South American Indian tribe and their plea for ecological sanity in a time when the earth is being ravaged by so-called civilized people.

One of the best films of 1992 is a warning by a South American Indian tribe that people give up their self-destructive ways and honor the planet before it is too late.

After four centuries of seclusion, the Kogi, descendants of a pre-Colombian civilization, asked BBC filmmaker Alan Ereira to visit their homeland in the Sierra Nevada mountains of northern Colombia. From the Heart of the World: The Elder Brothers’ Warning delivers their prophetic message to the world.

Seeing themselves as guardians of life on earth, the Kogi have a spiritual understanding of the bond between humankind and the natural world. This bond, they insist, must be honored.

The Kogi are governed by priests called “mamas.” As children, the mamas were educated in the dark and this early sensory deprivation has made them finely attuned to the mysteries and pleasures of their mountain environment. The Elder Brothers, as they call themselves, are convinced that we, the Younger Brothers, have wounded the earth through industrial exploitation, mining, and clearing of forests. They have seen signs of an ecological crisis in changing bird migrations and the lack of snow in the highest regions of the Sierra Nevada. The Kogis warn that unless we change our ways, the world will end: “If we act well, the world can go on.”

There have been many articulate calls for citizens of this planet to live in harmony with the natural world. But this video stands out as an especially cogent and moving plea for ecological wisdom. 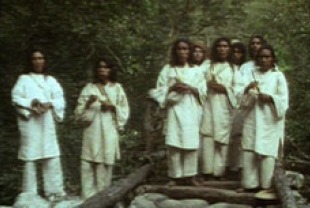