The desperate yearning of three strangers who meet in Mexico in l913 during Pancho Villa's revolution.

Harriet Winslow (Jane Fonda) is a school teacher and spinster who lives a stifling and boring life with her widowed mother in 1913. She wants to leave it all behind for adventure in Mexico as governess for a wealthy family. However, much to her surprise, she arrives to assume her new position and lands right in the middle of Pancho Villa's revolution. She is used by General Tomas Arroyo (Jimmy Smits) to gain access to the government held mansion Meanwhile, the elderly American writer Ambrose Bierce (Gregory Peck) is also in the area. This world-weary author of tales such as "An Occurrence at Owl Creek Bridge" has come to Mexico to die. Together, this odd threesome must deal with the past, love, death and the ties that bind them together.

Most of the drama, based on an inventive novel by Carlos Fuentes, is set on the Miranda estate. The general in Pancho Villa's revolutionary army decides to take a break from battle and ponder the tangled roots of his past as the bastard son of the landowner. Winslow, at first, doesn't quite know what to make of the dangerous and mysterious circumstances she finds herself in. But she slowly warms to the debates with Arroyo and the friendship that blooms with the cantankerous American journalist, who is simply known as "the Gringo." The two men, the idealistic woman, and their clashing ideas are depicted in this fascinating cross-cultural drama directed by Luis Puenzo.

Jane Fonda does a fine job portraying the repressed Harriet Winslow, a woman whose yearning for adventure is certainly fulfilled beyond her wildest imaginings. She also comes to see that she cannot save anyone. Jimmy Smits has his moments as the soulful Arroyo who falls in love with the American. But Gregory Peck's crusty and touching portrait of Ambrose Bierce overshadows these performances. In an especially poignant scene, he tells Harriet that he's smitten with her and then gives her time to think about a response. The energy that propels The Old Gringo in its magic moments is to be found in the powerful yearning of these characters for some kind of resolution to their lives. 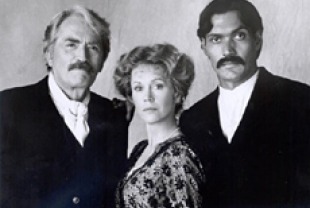