Directed by Mark Pellington
A well-done supernatural thriller with keen insights into parapsychological phenomena and the soulful nuances of the grieving process.

John Klein (Richard Gere) is a top reporter for the Washington Post. He and his wife Mary (Debra Messing) have just found a new house that suits them perfectly. While driving back to their own place, Mary sees a strange moth-like creature which causes her to lose control of the car. While treating her for injuries from the resulting accident, doctors discover a brain tumor. In the weeks before her death, she makes drawings in a notebook of the creature she saw.

Two years later, John is still deeply depressed about the loss of his wife and her last words to him about feeling that she had ruined everything. He wonders whether he'll ever be happy again. One evening he leaves Georgetown to drive to an interview in Richmond, Virginia. John mysteriously winds up in Point Pleasant, West Virginia, over 400 miles out of the way. With his car stalled on the road, he goes to a nearby house for help and finds himself staring into the end of a rifle held by Gordon Smallwood (Will Patton), who claims he is the same man who bothered him two nights in a row. Police officer Connie Mills (Laura Linney) explains to the befuddled stranger that weird things have been happening in this community of God-fearing individuals. Local people have reported seeing a tall creature with red eyes, hearing otherworldly sounds on their telephones, and experiencing bleeding around their eyes. When John sees a sketch of the creature, it is identical to the ones made by his deceased wife. He draws closer to Smallwood. The community seems possessed by this alien being who predicts various tragedies such as the deaths of 99 people in a plane crash.

John travels to Chicago to visit Alexander Leek (Alan Bates) a expert on the paranormal. He talks about an angel of death labeled "Mothman" who has been seen in ancient cave drawings and experienced by people before the Chernobyl disaster. Leek warns John not to get caught up in investigating this inexplicable phenomenon.

The Mothman Prophecies is loosely based on a 1975 book by John A. Keel about a series of strange occurrences in Point Pleasant, West Virginia, in 1966 and 1967. This mesmerizing supernatural thriller is directed by Mark Pellington whose previous film Arlington Road was a tour de force of chills. John's grief over the loss of his wife and his character trait of always needing to know answers make him an ideal target of the supernatural force at work in Point Pleasant. His relationship with Connie, the local cop achieves some intimacy as they work together gathering material about Mothman. In a crucial scene, Connie relates a dream she had about drowning and being called back from death. Later, she makes one last desperate attempt to pull John out of his obsession with Mothman, asking him to rejoin those in the land of the living.

This supernatural thriller clicks with its thought-provoking treatment of parapsychological phenomena and its realistic handling of the complicated nuances of the grieving process. 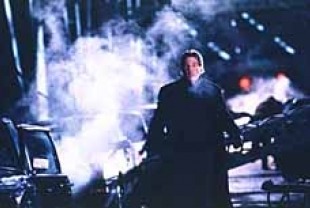