Directed by Brad Silberling
A bittersweet drama about the limbo of grief and how truth-telling can open the door to liberation.

Grief puts people in limbo, somewhere between what was yesterday and what will never be tomorrow. The loss of a loved one is immobilizing. The bereaved wander in a daze, exiled from the everyday concerns of those around them. In this bittersweet drama set in Cape Ann, Massachusetts, in 1973, the three main characters are stranded in this in-between realm. They yearn for a way out but aren't quite steady enough to negotiate the passage. And so they wait in sorrow and discontent.

Joe Nast (Jake Gyllenhaal) is staying with Ben (Dustin Hoffman) and JoJo Floss(Susan Sarandon) after Diane, their daughter and his finacee, was murdered in a restaurant by a stranger. He believes that one of the tasks of mourning is taking care of the living. Each of these three is handling grief in a different way. Ben, who feels burdened with the feeling that he never really connected with his daughter, plunges back into his work in commercial real estate. In fact, he convinces Joe to become his partner in the business just as they had planned a few weeks earlier. JoJo, a writer and outsider who doesn't really need people, is very put off by all the mawkish displays of pity and consolation meted out by people in the community. While her husband feels obligated to answer each and every phone call, she would just as soon go into hibernation for several months. She also returns to cigarettes and liquor, two addictions from the past.

Feeling that he is all they have left of Diane, Joe tries lamely to hold himself together in this tension-filled household. On an errand to retrieve the already mailed wedding invitations, he meets and is somewhat taken by Bertie (Ellen Pompeo), a clerk at the post office. She also works at Cal's, a bar and restaurant owned by her boyfriend, who has been missing in action in Vietnam for three years. Both Joe and Bertie are residing in limbo, and that shared situation draws them together. He lost his fiancee abruptly without being able to say goodbye. She has never had the gift of an ending so she could stop hoping that one day Cal would walk in the door.

Writer and director Brad Silberling (City of Angels) has developed this story out of his own experiences in a personal tragedy. This must be why the characters come across with such vibrancy. The soulful connection between Joe and Bertie is nicely developed in relaxed and genuine ways. They both push each other to come out of hiding and to express the truth of their inner selves. Ironically, Joe's moment of truth comes when he's called to testify in the trial of the man who murdered his fiancée. The prosecuting attorney (Holly Hunter) wants the judge to have some sense of what was lost when Diane was killed. Joe stuns everyone with the honest words that come from his heart.

Throughout the film the main character is a very quiet person. At first, this is a little irritating — yet another portrait of a young man who can’t express his feelings. But silence turns out to be just the right milieu for Joe's epiphany. Or as Shantiasa has put it: "Truth does not reveal itself in the chatter of conversation, nor can it be coaxed to betray its secrets upon a printed page. Truth speaks only in the deep stillness of silence."

One other comment on Moonlight Mile. All fans of 1970s rock music will be elated by the songs here by Elton John and Bernie Taupin, Jefferson Airplane, Jethro Tull, Bob Dylan, Van Morrison, and the Rolling Stones.

The DVD includes deleted scenes, a "Making of…" feature, and audio commentaries with director Brad Silberling and stars Dustin Hoffman and Jake Gyllenhaal. 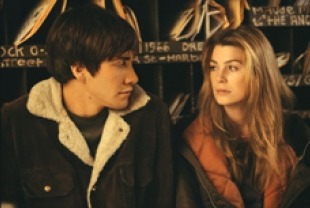 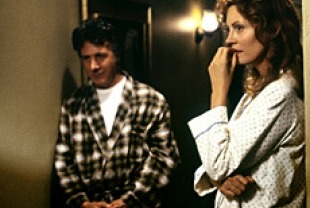