Directed by Hong Sangsoo
Graphically depicts the impact desire, coincidence, and fate have upon romantic relationships.

Gyung-soo (Kim Sang-kyung) is an actor in Seoul whose last picture was a box-office bust. When he visits the film company offices, he has an angry encounter with the director, who thinks he is too self-centered. Feeling sorry for himself, he decides to visit an old school buddy, a writer, in Kangwon province, a popular vacation area. They go out with some prostitutes for a heavy night of drinking. On a ferry trip to a Buddhist temple called the Turning Gate, his friend tells him a story about a princess and her lover, a commoner. It is a tale of lost love.

The writer introduces Gyung-soo to Myung-sook (Yeh Ji-won), who performs a modern dance, a traditional one, and then the salsa at the studio where she works. She is attracted to the actor, and they wind up in bed together. But Gyung-soo is not ready to commit himself to a serious relationship. He also is not sensitive enough to see that his friend is in love with Myung-sook. At the train depot, they both show up, causing the guest a great deal of embarrassment.

On the way home, Gyung-soo meets Sun-young (Chu Sang-mi) who is familiar with his work on the stage. He decides to pursue this relationship and gets off the train in her home town. It turns out she is married to a university professor. But the oddest turn in their relationship is that the actor doesn't remember her from a past connection years ago. They have sex, and Gyung-soo thinks he is in love with her. However, a spontaneous visit to a woman who tells fortunes doesn't help his cause very much. Her prediction is for success and good fortune for Sun-young and her husband and only doom and gloom for Gyung-soo.

In his fourth feature film, Korean writer and director Hong Sang-soo has fashioned a drama that graphically depicts the impact of desire, coincidence, and fate upon romantic relationships. One of the risks of love is that we will reach out to someone we find to be the answer to our dreams only to have that person reject us. Turning Gate depicts this universal predicament — one that all men and women have experienced at one time or another. 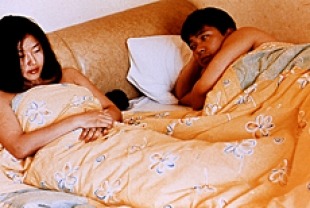