Directed by Hilary Birmingham
A beautifully acted and emotionally rich film set in Nebraska about the damage done to a family by a long-kept secret.

So much damage is done when we keep family secrets. The idea of concealment is to give us time to cope with incidents we wish had never happened. By banishing them to secrecy, we delude ourselves into believing that they will magically go away. But the eventual fallout from these emotional bombs is often devastating. Family secrets have a life of their own and when they show up unexpectedly, they often release waves of sadness and shame, guilt and confusion. They build walls between loved ones and can bring about wounds in those who feel betrayed and kept in the dark regarding important matters.

The sticky and complex theme of a family secret is at the core of Tully, a beautifully acted and emotionally resonant film directed by Hilary Birmingham. It is the kind of movie that is rarely made anymore in this era of big budget films with established superstars who are able to draw international audiences. Tully is an intimate drama set on a family farm in Nebraska. It is based on an award-winning story by Tom McNeal. Like Straight Story, this film challenges us to slow down, to accommodate ourselves to the rhythms of the Midwest where everything seems to unfold at its own speed.

Tully Coates Sr. (Bob Burrus) is a Nebraska rancher who likes doing things his own way. Through hard work, luck, and the help of his two sons, he has managed to keep things afloat. Tully Jr. (Anson Mount) is set to inherit the place yet he feels that his taciturn father does not treat him with respect. While he is known in the community as a womanizer, his younger brother Earl (Glenn Fitzgerald) is shy and somewhat frightened by girls. Yet his best friend is Ella Smalley (Julianne Nicholson), a neighbor who works at a veterinary clinic. During the summer, she finds herself drifting closer to Tully, who is dating April Reece (Catherine Kellner), a sexy dancer who works as a stripper. He welcomes Ella's attention and actually finds himself sharing private things with her, such as that he finds solace in a field of grazing cows at night. She takes him to one of her favorite places, a swimming pond where they cavort together like children. But after they finally have sex, Tully pulls away. He's frightened by the unfamiliar feelings of love sweeping through him.

The family secret that Tully Sr. has kept from his two sons has to do with their mother, who died in an automobile crash. A stranger (John Diehl) shows up at the ranch one day and reveals some shocking information about her which has special reverberations for Earl. But Tully Jr. is totally stunned by the revelations and the fact that his father has kept him in the dark for so many years. In the end, it is his acknowledgement of love for Ella that serves as a ballast to carry him through a series of further shocks and setbacks.

Tully will appeal to those who appreciate the dynamics of emotional literacy and the complexities that cluster around family secrets. 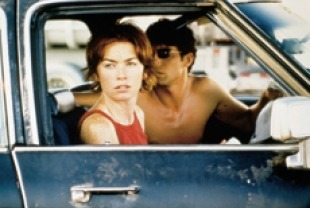