Directed by Paul Hunter
Gives Chow Yun-Fat a chance to walk on the stairs of air in a series of high-flying acrobatic moves while he tries to pass on his wisdom as a Tibetan monk to a young streetwise pickpocket.

In 1942, a Tibetan monk (Chow Yun-Fat) with extraordinary martial arts skills is chosen as the guardian of a mysterious scroll that contains secrets of immense importance to the human race. Designated Monk with No Name by his master, he escapes from the clutches of Stucker (Marcus Jean Pirae), a power-hungry Nazi who desperately wants the scroll. Sixty years later, this zealous old man is still in pursuit of the monk on the streets of an American city.

Kar (Seann William Scott), a pickpocket, works at the Golden Palace theatre where he watches martial arts movies and learns new techniques from the stars on the screen. He bumps into the monk, and together they rescue a little girl whose leg is caught under a subway track. The monk realizes that this energetic but undisciplined youth could be a candidate for the next guardian for the scroll.

In a martial arts session with Kar, the monk tells him that he must learn about the meeting of the opposites. He adds, "It's not about anger, it's about peace. It's not about power, it's about grace." The monk meets with some other Tibetans but doesn't see the right one in their midst. Time is growing short, and Stucker is hot on his trail again, this time assisted by his granddaughter, Nina (Victoria Smurfit), and a gang of henchmen. The monk and Kar try to even the odds by enlisting the help of Bad Girl (Jaime King), who sees that the Nazis have hidden behind the activities of a human rights organization to do their dirty deeds.

Paul Hunter directs from a screenplay by Ethan Reiff and Cyrus Voris based on a comic book series. The only reason for commenting on this action comedy aimed at teenage and younger audiences is the presence of the inimitable Chow Yun-Fat of Crouching Tiger, Hidden Dragon fame. As the Monk With No Name, he possesses incredible martial arts skills, along with compassion and a respect for peace and grace. It is interesting to watch him try to pass on his spiritual understandings to the streetwise and skeptical Kar, who at one point criticizes his "fortune cookie philosophy." Sadly, this young man, unlike the Karate Kid, doesn't seem to be very receptive to the wisdom of his teacher. But we must be thankful for small pleasures: It is good to watch Chow Yun-Fat step on the stairs of air in his high-flying acrobatic moves, but even more enchanting to listen to his Eastern wisdom tailored to the hustle and bustle of the city streets.

The DVD edition includes five featurettes grouped under the title "The Tao of Monk" though the focus is less on Taoist philosophy and more on how the action sequences were put together. There is also an audio commentary with director Paul Hunter and the producers and another one with writers Ethan Reiff and Cyrus Voris. A few deleted scenes, an alternate ending, and a behind-the-scenes photo gallery round out the extras. 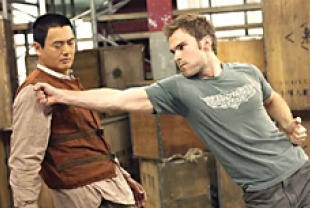