Directed by Bryan Singer
An inventive and exciting sci-fi spectacular where mutant humans battle the zealous forces of law and order.

This is the second film, after 2000's X-Men, in the sci-fi saga that began as a Marvel Comics series. During the prelude, we hear the following assessment of humanity, and we nod our heads in agreement: "Sharing the world has never been humanity's defining attribute." Mutant humans possessing strange and awesome powers live in most communities but are feared and shunned by humans. Helping them learn to use their powers wisely, while protecting them from persecution, is the job of a special group known as the X-Men.

When the President of the United States is attacked by a teleporting mutant, the cry goes up immediately for a Mutant Registration Act. Meanwhile behind the scenes, William Stryker (Brian Cox), a wealthy former Army commander and scientist, is planning for a full-fledged attack on the organization he is convinced serves as a front for the mutant movement.

Magneto (Ian McKellen), a mutant who believes that a war with humans is necessary to establish dominance, is liberated from prison by the shape-shifting Mystique (Rebecca Romijn-Stamos). Realizing that Stryker poses a formidable threat to all those who are different, he decides to join forces with the X-Men to fight this common enemy.

Professor Charles Xavier (Patrick Stewart), the world's most potent telepath, runs a School for Gifted Children. He is disturbed by the attack on the President and dispatches Jean Grey (Famke Janssen), who has telekinetic and telepathic skills, and Storm (Halle Berry), who can manipulate weather disturbances, to find the mysterious assailant. The troublemaker turns out to be Nightcrawler (Alan Cumming), a former circus performer from Germany who is deeply religious. In the midst of all the chaos that will ensue, he not only offers his teleporting skills to the X-Men but his prayers as well. In a clever twist, this pious Christian actually looks like the Devil with his pointy ears, yellow eyes, and a forked-tale.

Wolverine (Hugh Jackman) returns from a mission for Xavier and finds that Rogue (Anna Paquin), who can absorb the energy and memories of anyone she touches, has fallen in love with Iceman (Bobby Drake), who can lower his body temperature and radiate intense cold. Meanwhile, Wolverine's love interest, Jean Grey, has become romantically involved with Cyclops (James Marsden), whose eyes release energy blasts. But probably the real reason Wolverine finds himself alone is that he has spent a lot of time and energy trying to uncover repressed memories of his origin. For the moment, even that must be put aside when Stryker orders a full-scale attack on the school.

Bryan Singer (The Usual Suspects) directs X-Men 2 with great verve and confidence. The special effects are dazzling, and the new characters add even more inventiveness to the series. Check out the newcomer Pyro (Aaron Stafford), who can manipulate fire and sometimes goes overboard. Watch with glee as Rogue and Iceman try to negotiate their romance without destroying each other in the process. Hold your breath when Wolverine is forced into hand-to-hand combat with Stryker's nefarious assistant, Deathstrike (Kelly Hu). She has claws that are larger than his!

Be prepared for the exciting finale where the X-Men are forced to overcome one obstacle after another in their efforts to save Xavier and Cyclops in a very dangerous environment. This bold and adventuresome sci-fi thriller will keep you on the edge of your seat. You'll marvel at all the wonders appearing on the screen while you root for the ones fighting for tolerance and sharing the world. 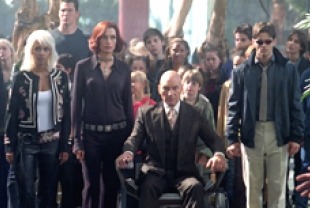