Directed by Elliot Silverstein
A mesmerizing film about the experiences of a British aristocrat in 1825 struggling to survive in a Sioux tribe.

Lord John Morgan (Richard Harris), a British aristocrat, scorns his heritage and goes on a hunting trip in America's West. There, his companions are killed by a Sioux war party, and he is captured. The year is 1825, and these Native Americans have never seen a "white" man before. Morgan is named "Horse" and treated as a beast of burden by the chief's mother, Buffalo Cow Head. He is tutored in the ways of the tribe by another captive, Batise (Jean Gascon).

Realizing that freedom can only be gained in one way, Morgan works his way up the Sioux ladder of success. He wins the heart of the chief's sister, Running Dear (Corinna Tsopei); he gains the respect of Chief Yellow Hand (Manu Tupou) by undergoing the Sun Vow, an ordeal of pain and violence by which the Sioux warrior is honored for his bravery. In the end, he fights with his Sioux brothers against the Shoshones and then leaves with a war party escorting him back to "civilization." His life, however, has been dramatically changed.

A Man Called Horse is a rare piece of historical drama directed by Elliot Silverstein. Minor flaws in the style and storyline do not mar its documentary-like feel. The film's crew went to great lengths to reference every detail of Sioux life and culture, which was validated by Clyde Dollar, a Sioux historian-archaeologist. The outcome is impressive. Meshed with the storyline of the film is an ambitious attempt at anthropological reporting. We view an organized system of beliefs, traditions, and customs characteristic of daily life amongst the Sioux. We are challenged to respond with the British aristocrat to their unusual rituals as well. This fascinating film deserves many viewings to fully absorb its many insights. 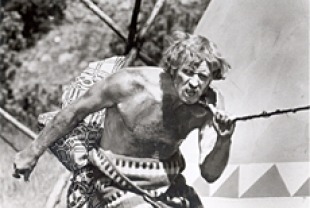