Directed by Arnie Glimcher
A robust and impressive performance by Armand Assante as Cesar, a musician whose lust for life affects all those around him.

In The Mambo Kings, Cesar (Armand Assante) and his younger brother Nestor (Antonio Banderas) are talented Cuban musicians who leave their homeland in 1952 for a better life in America. While the flamboyant Cesar dreams of future fame and fortune, the shy and melancholy Nestor pines away for Maria, the beautiful woman he left behind.

When the Castillo brothers arrive in New York, they find that the Cuban nightclubs and casinos are controlled by gangsters. Although they impress crowds with the vibrancy of their mambo music, Cesar refuses to sell his soul to a mobster (Roscoe Lee Browne) who wants to control their careers.

As a result, they must work by day in a meat-packing plant and by night playing bar mitzvahs and birthday parties. Nestor falls in love with Delores (Maruschka Detmers), a maid, and Cesar settles down for a while with Lanna Lake (Cathy Moriarty), a cigarette girl from a nightclub. Their big break comes when Desi Arnaz (Desi Arnaz, Jr.) hears them one evening and invites them to appear on his popular TV show "I Love Lucy." They perform Nestor's romantic ballad "Beautiful Maria of My Soul" which becomes a hit.

In his directorial debut, Arne Glimcher has made Oscar Hijuelos's 1990 Pulitzer Prize-winning novel, The Mambo Kings Play Songs of Love into a full-throttle triumph filled with lively music and characters. Armand Assante gives the most robust and impressive performance of his career as Cesar, a musician whose lust for life affects all those around him. Although Nestor defers to him, he secretly resents his controlling personality.

Similar to The Fabulous Baker Boys, this film poignantly explores the fervent loyalty and fierce rivalry of two brothers whose intense relationship is both a blessing and a burden. This added familial dimension gives The Mambo Kings a fire power that puts it miles ahead of its closest competition. 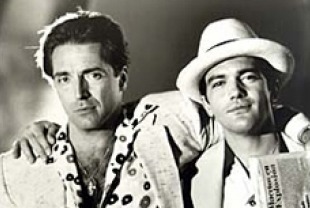