Directed by Terry Gilliam, Terry Jones
A comic classic that spoofs the earnestness of King Arthur and his noble quest.

King Arthur is on his quest for the Holy Grail and no one cares. He has very little budget to work with, so he has a peasant substitute for a horse by making clippity-clop sounds with coconuts. He is denied passage to a castle by a Black Knight who thinks he is invincible but loses both his arms and legs to the King's mighty sword. Meanwhile, the natives are restless, hauling away a man who protests that he is not yet dead on a cart of corpses and judging a woman as a witch when there is no evidence against her.

King Arthur has his problems with some nasty Frenchmen who prove to be uncooperative, and Lancelot gets in trouble by being too energetic with his sword in Castle Anthrax inhabited by teenage girls who want him to spank them. All the knights of the Round Table must come up with some creative responses when squaring off against a killer bunny and dealing with the Knights who say "Ni." Our favorite moments are when they respond to a perilous situation by yelling "Run Away! Run Away!"

This Collector's Edition of the classic spoof of the Arthurian tales is a two DVD set. Included is commentary from directors Terry Gilliam and Terry Jones plus "general complaints and back-biting" from John Cleese, Erid Idle and Michael Palin. Many of the extras are really parodies of the kinds of things you find on other DVD releases. There are subtitles for people who don't like the film (lines taken from Shakespeare's Henry IV), sing-alongs, a mini-documentary on "Things To Do With Coconuts," another documentary about finding the locations, and a take-off on a BBC interview. Best of all, there is a paperback version of the entire clever and immensely witty screenplay with photographs from the film 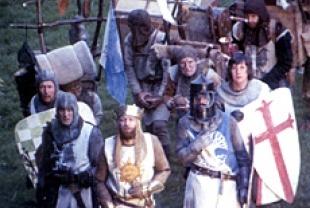 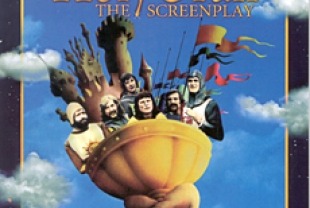