Directed by Ronald Neame
Puts up front the precise comic timing of Walter Matthau as an outspoken liberal justice of the Supreme Court.

Dan Snow (Walter Matthau) is an outspoken liberal justice of the Supreme Court who believes individual rights are absolute. Following the death of one of his colleagues, Ruth Loomis (Jill Clayburgh) wins confirmation as the first woman justice on the Supreme Court. She is an unyielding advocate of big business and conservative in her opinions.

The subject matter is certainly contemporary in the screen adaptation of Jerome Lawrence and Robert E. Lee's 1978 Broadway drama. Much is made of the male chauvinism of the other justices but, except for a few one-liners, little is done with feminism.

Predictably, Snow and Loomis square off against each other in a case involving censorship and then in a debate over a conglomerate's control of parents. The all's-well-that-end's well finale sees the liberal softening his edges and the conservative losing the stiffness of her dogmatism. Matthau carries most of the film with his precise comic timing. Jilly Clayburgh does the best she can with her low-calorie role. 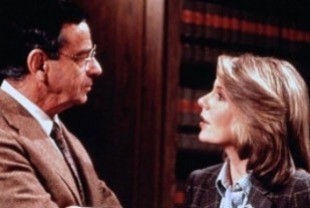