Directed by Jon Shenk, Megan Mylan
An excellent documentary about the struggles of two African youth to adapt to their new life in America.

This intriguing documentary by Megan Mylan and Jon Shenk follows two teenagers from Sudan after they are brought to the United States by various church and social service agencies to start a new life. Peter and Santino are first shown in the Kenyan refugee camp where they have spent the last nine years. They are part of the some 20,000 cattle-tending "lost boys" who miraculously survived the civil war in Sudan that claimed an estimated two million lives. At a farewell meeting for one of the boys, a man says that the journey to America is like going to heaven. But for Peter and Santino, it is difficult to leave behind their friends in the refuge camp. With no parents, they have bonded deeply with the other lost boys.

The two youth arrive in Houston and are given instructions on how to handle the stove and garbage disposal in the apartment where they will be staying. After living in mud huts in Africa, they experience culture shock upon discovering the building's second floor and a grocery store packed with food. And soon Peter and Santino are forced to face the harsh realities of their situation: living in a neighborhood where black on black violence is rampant and working hard doing assembly-line work that doesn't pay very much.

Eventually, Peter leaves for Kansas since he is interested in advancing himself. He enters high school and works at a night job. Santino, on the other hand, gets into trouble in Houston when he has an accident while driving without a license. In both places, evangelical Christians are involved with the boys. Peter is invited to a youth meeting, but he seems a very lonely figure in the group.

This excellent cross-cultural documentary vividly conveys the struggles and hurdles these two from Sudan face in America. At a national reunion with other lost boys in the States, there is much talk about how money rules their lives and how they feel like outsiders even with black Americans. But worst of all, these Africans miss the joys and delights of living in community. Used to putting their arms around friends, in America they are told that such body contact among men is inappropriate behavior. Although Peter excels in school and proves himself to be a super-achiever, his sister back home criticizes him for not sending more money for those left behind. These African refugees come to see that there is no heaven on earth.

The DVD has an audio commentary and interviews with directors Megan Mylan and Jon Shenk, which convey their deep commitment to the film and finding ways to alleviate the suffering in the Sudan and among refugees. There are also updates on what's happened to Peter and Santino. Two deleted scenes, some samples of Sudanese music, and links to sources of additional information round out the extras. 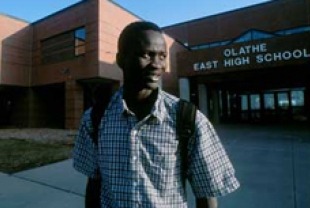