Wilbur Wants to Kill Himself

Directed by Lone Scherfig
A bittersweet Danish film that demonstrates that those who nurture others are the most beautiful souls on the planet.

Wilbur (Jamie Sives) lives alone in a Glasgow apartment. He has attempted suicide so many times that the others in his therapy group at the local hospital no longer want him in their presence. He's too much of a downer and never has anything positive to say about their struggles. His building superintendent kicks him out after a failed suicide attempt using a gas oven. The only person in the world who loves him is his older brother, Harbour (Adrian Rawlins). He is a nurturing male who took care of their father when he was dying and over the years has pulled his brother out of many a desperate situation. Now Wilbur moves in with him, sharing the living quarters next to the second-hand bookstore they have inherited from their dad.

After Alice (Shirley Henderson), a single mother of eight-year-old Mary (Lisa McKinlay), loses her cleaning job at the hospital, the good-hearted Harbour asks her to live with them. He later marries this quiet and unassuming woman. Then Harbour tries to find a mate for Wilbur, who has always been uneasy around women. Moira (Julia Davis), a nurse at the hospital, seduces the suicide-prone young man but he can't take her New Age obsession with health food. Although Alice loves Harbour, she finds herself sexually attracted to Wilbur. This complication opens up some challenges to their newly established household. The happiest of all is Mary who has two stand-in fathers who dote on her.

In her previous film Italian For Beginners, Danish filmmaker Lone Scherfig provided a soul-satisfying anatomy of the different shades of loneliness and the universal yearning for love and connection. In this bittersweet drama, she puts the emphasis on the nobility of sacrificial love. Whereas other directors shy away from this sobering theme, Scherfig handles it well with comic élan. Adrian Rawlins steals the movie with his multidimensional portrait of Harbour, a sensitive caretaker who has looked after his wayward and weird brother for years. This nurturing male sets aside his own needs and makes it possible for Wilbur to find the footing he needs to move beyond the habit of attempting suicide. In a turning point, Wilbur saves a woman from his former therapy class who tries to drown herself. The closing section of this heart-affecting Danish drama reveals how those who nurture others are the most beautiful souls on the planet. 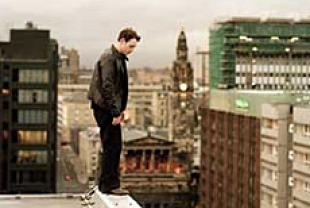 R - some language, some disturbing images