Eternal Sunshine of the Spotless Mind

Memory organizes information, knowledge, and experiences within an elaborate internal library. We tend to think of this faculty as an accurate historian or a safe storage vault — but it isn't. Think of memory as a roving novelist who constantly edits the past and assembles interesting bits of knowledge, information, and experience in new storylines.

Screenwriter Charlie Kaufman explored the mind in his inventive movie Being John Malkovich and probed the mysteries of identity and creativity in Adaptation. Here Kaufman, taking his title from a poem by Alexander Pope, delves into the manifold complexities of memory, love, desire, and disappointment. The film, directed by Michel Gondry, does not go down easily, and viewers will have to be patient and open to the zigzagging twists and turns in the storylines, juxtapositions, and optical tricks. But those familiar with the rewards of staying with films like Memento and Mulholland Drive will find plenty of pleasures to savor here.

Joel Barish (Jim Carrey) is an introverted and shy man who falls under the spell of Clementine (Kate Winslet), a free spirit who bores easily and is constantly looking for new things to experience. They are exact opposites, and for a while this works until she becomes irritated with his predictability and he gets turned off by her flip-flopping moods. Clementine secretly goes to Lacuna Lab where Dr. Howard Mierzwiak (Tom Wilkinson) erases her memory of Joel through a procedure guaranteed to usher patients into a new life free from old and unwanted baggage. Joel finds out about her memory makeover and signs up for one as well. Worried about side effects, he asks about possible brain damage, to which Dr. Mierzwiak replies, "Technically speaking, the procedure is brain damage."

The erasure of Clementine takes place at Joel's home but complications ensue during the evening. Stan (Mark Ruffalo), the technician, is distracted by his best friend Patrick (Elijah Wood), who has started dating Clementine. Later, Mary (Kirsten Dunst), a receptionist at the Lacuna office, shows up and decides to party with Stan. When the procedure goes awry, they have to call in Dr. Mierzwiak to make sure that all of Joel's memories of Clementine are erased — both bad and good. But the good ones are enough to make Joel want to abort the erasure and escape with Clementine to better times in his life, including when he was just four years old and enjoyed being bathed in the kitchen sink.

Eternal Sunshine of the Spotless Mind is a fascinating psychological drama that deftly probes the emotional upheavals of love and loss. Jim Carrey is suitably vulnerable and caring as the baffled and bedazzled young man who is swept off his feet by a romance that takes him to places he never dreamed of going. But it is Kate Winslet's top-notch performance that gives this creative story its sparkle and tang. This attractive woman displays a range of moods to match her ever-changing hair color, and she loves doing wild and crazy things. An added value to the drama is that it gives us a fresh appreciation of the rare and wonderful gift of our memory as an inner archive of innumerable splendors.

The DVD has a "making of" featurette and another with the director, Michel Gondry, and the star, Jim Carrey, discussing the making of the film. Gondry and screenwriter Charlie Kaufman provide an audio commentary. 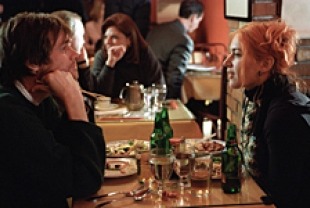 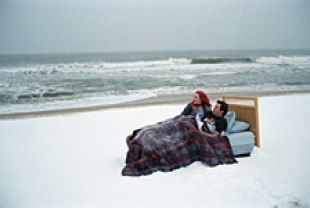