Directed by Brian Dannelly
A scrappy satire that pokes fun at the zealous intolerance of some Christians and salutes the hospitality that welcomes all.

Mary (Jena Malone) is a happy camper who attends the American Eagle Christian Academy where she is a proud member of the Christian Jewels singing group. Her single parent mother (Mary-Louise Parker) is also flying high after having been named #1 Christian interior designer for the greater Baltimore area. But trouble looms on the horizon for this born-again believer.

After her boyfriend, Dean (Chad Faust), tells her that he thinks he is gay, Mary has a vision of Jesus and decides after much soul-searching to go to bed with Dean to put him back on the right path away from evil. Dean's parents later find evidence of his sexual orientation, and he is promptly sent away to the Mercy House Christian Treatment Center to eradicate his "spiritually toxic affliction."

Feeling abandoned by God, Mary experiences her own teenage dark night of the soul and begins to see things more clearly. Hilary Faye (Mandy Moore), the manipulative head of the Christian Jewels and the most outspoken and zealous believer in the senior class, leads prayer groups for Dean, and when she finds out that Mary is pregnant, turns against her big time. For kindness, Mary has to look to Cassandra (Eve Amurri), the school's only Jew and a person who prides herself on going against the in-crowd. This rebel's best friend is Roland (Macaulay Culkin), Hilary's wheel-chair bound cynical brother. Not even Pastor Skip (Martin Donovan), the principal of the Academy and the secret lover of Mary's mother, can handle the chaos that ensues leading up the grand finale of prom night.

This scrappy satire pokes fun at the rigidity of proud, angry, and intolerant fundamentalist believers. It is not against Christianity (as some movie critics have charged); it is ridiculing its most intolerant forms while making a good case the spiritual practice of hospitality. Henri J.M. Nouwen wrote of this virtue: "it allows us to break through the narrowness of our own fears. . . . Hospitality makes anxious disciples into powerful witnesses, makes suspicious owners into generous givers, and makes close-minded sectarians into interested recipients of new ideas and insights."

Brian Dannelly directs from a screenplay cowritten with Michael Urban. The zeal of Hilary's faith is built upon her need for attention and power over others. The crusade against wickedness so animates her that she has no energy left for the heart and soul of the Gospel, which is loving one's neighbor. In one of the film's many poignant moments, Hilary throws a Bible at Mary after not being able to pull off a mini-exorcism to return her to the right path. Mary picks up the Bible and holds it in front of her righteous friend's face and says: "This is not a weapon!" Instead the filmmakers want us all to see that God loves hospitality and diversity.

Extras on the DVD include one audio commentary by director and co-writer Brian Dannelly, producer Sandy Stern, and co-writer Michael Urban, and another commentary by stars Mandy Moore and Gena Malone. There's also a "Heaven Help Us" featurette and some deleted scenes and bloopers. 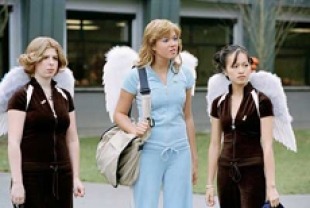