Directed by Joshua Marston
The compelling story of a courageous and adventuresome seventeen-year old Columbian.

Maria (Catakina Sandino Moreno) is an attractive and spirited seventeen year old who lives in a small town north of Bogota, Columbia. She works for very low wages at a large industrial rose plantation along with her best friend Blanca (Yenny Paola Vega). Maria's grandmother, mother, sister, and infant nephew depend on her paycheck to sustain their meager household. Maria's dissatisfaction with her life seeps into her relationship with Juan (Wilson Guerrero), who doesn't share her yearning for something more. In a simple scene that speaks volumes about their differences, Maria climbs the side of a building for a rooftop view of things; Juan refuses to join her in this brief adventure. At work, she quits when her supervisor refuses to let her go to the bathroom. Then Maria discovers that she is pregnant; although Juan volunteers to marry her, she knows that it is not what she wants.

While on her way to Bogota to check out jobs working as a maid, Maria meets Franklin (Jhon Alex Toro), whom she remembers from a party. Sensing that she wants to do something different, he tells her about a job as a mule, transporting drugs to the United States. She meets Javier (Jaime Osorio Gomez), who explains the high pay and the complicated operation, and in secret, she talks with Lucy (Guilied Lopez), who has carried drugs to America and survived all the dangers of the work.

Writer and director Joshua Marston has created a tension-filled drama about one poverty-stricken young woman's quest to pull herself out of the doldrums. He does not spare us any of the frightening dimensions of working as a drug mule — ingesting 62 nuggets of heroin sealed with latex and dental floss, the demise of one of her co-worker when a pellet explodes inside her body, and the pressures from both customs officials and drug dealers in the United States. Catalina Sandino Moreno gives a tour de force performance as Maria whose close encounter with death, danger, betrayal, and violence brings out her own steely brand of courage and determination to forge a new life for herself no matter what the cost. 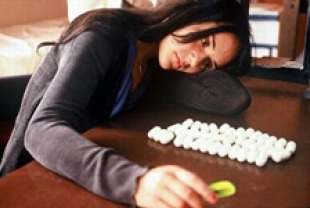