Directed by Ken Harrison
A well-crafted and intimate film that tackles the big themes of love, suffering, death, and grieving and refuses to over inflate its subject matter.

The year is 1918, and the town of Harrison, Texas, is abuzz with news about how the local boys are faring in the war in Europe. Horace Robedaux (Wiliam Converse-Roberts) runs the dry goods store to support his wife Elizabeth (Hallie Foote) and their baby daughter Jenny. He has just demonstrated his patriotism to the whole community by purchasing $4,000 in war bonds at a local rally.

Meanwhile, Elizabeth's brother (Matthew Broderick), who has flunked out of college, spends his afternoons watching war movies at the theatre and talks incessantly about how anxious he is to fight the Germans. He reveals to Elizabeth that he needs money to pay off a gambling debt and to get a girl from college an abortion. Elizabeth loans him the money, but is unprepared for the sacrifice her father suggests. Mr. Vaughn (Michael Higgins) offers to take care of her and Jenny so that Horace can go to war. She confesses to her mother (Rochelle Oliver) that she doesn't want Horace to go, and he doesn't want to leave the family.

The war overseas, however, is soon overshadowed by tragedy at home. An influenza epidemic sweeps across Harrison. The Vaughn and Robedaux families come face-to-face with death and grief. Horace and Elizabeth must dig deep inside to regain a sense of momentum in their lives. The birth of a second child coincides with the announcement of the armistice ending World War I.

Horton Foote, the Academy Award-winning screenwriter of To Kill a Mockingbird and Tender is the Night, has adapted 1918 from one of the plays in his nine-play cycle called The Orphan's Home about several generations of a family living in a small Texas town. In the spirit of all moving works of art which tackle the big themes of love, suffering, death, and grieving, this well-crafted and intimate film refuses to over inflate its subject matter. Instead, it tells its story and conveys its messages through credible and sympathetic characters. 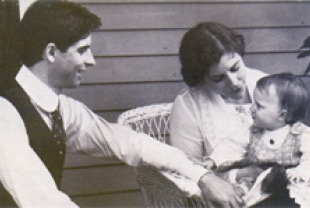