Australian filmmaker Peter Weird has concocted this appealing romantic comedy set in New York City. George (Gerard Depardieu), a French composer, and Bronte (Andi MacDowell), a New York horticulturist, meet briefly, get married in a civil court, and separate. This marriage of convenience suits them both. He wants the green card which enables him to live and work in the United States, while she covets a "married only" apartment with a green-house attached to it.

When the Immigration and Naturalization Service schedules a meeting to check up on the newlyweds, George and Bronte decide that they should live together for some time so that they can answer the interviewers' questions. It doesn't help that they are totally unlike each other and disagree on everything from politics to housekeeping to sex. The best scenes in the film revolve around a two-day cram course during which they each share their life histories — and make up one about their travels together since the wedding.

Gerard Depardieu is charming and disarming as the bohemian Frenchman who surprises everyone with his sensitivity and an improvisational piano performance at a party. Andie MacDowell (sex, lies, and videotape) again plays a repressed and rigid woman who learns to lighten up when she listens to the promptings of her heart rather than her head. The blooming of intimacy between these two seemingly mismatched individuals is a delight to behold. 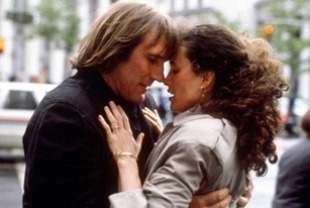