Directed by Robert Zemeckis
A marvelous screen adaptation of the Chris Van Allsburg Christmas classic about one of the great enduring mysteries of the universe -- Santa Claus.

Nowadays we are raising children who know too much too soon and put far too much stead in reason and logic. But as scientists have pointed out again and again, the universe is a mysterious place that goes far beyond our capacity to understand it. In fact, many of these rational men and women agree with the mystics in all religious traditions who honor the limits of our knowledge. As the Catholic theologian Leonardo Buff has put it: "We never 'catch up with' reality itself. The real nature of mystery always evades our attempts to conceptualize it, and escapes the nets of our language and symbolism. Its depths are never plumbed. Mystery is always linked to passion, enthusiasm and all great emotions, in short, to life's deepest and greatest impulses."

Thankfully, there are some defenders of this way of looking at life and many of them are authors of children's books. They tutor us and the young ones in the arts of wonder, curiosity, and the adventure of not knowing. One such author is Chris Van Allsburg, the author and illustrator of The Polar Express, a Caldecott Medal winning children's book. This marvelous fairy tale has been adapted for the screen by director Robert Zemeckis and co-writer William Broyles Jr. This family film is a gem that should find its way into the hearts of all those who celebrate the Christmas spirit.

Hero Boy (voiced by Daryl Sabara) has reached that critical year of his young life when he is not sure whether to believe in Santa Claus. He didn't have his picture taken at the department store Santa; he didn't send a letter; and he made his little sister leave the milk and cookies out on Christmas Eve. Snuggled in his bed upstairs, he listens hard for the sound of sleigh bells. But instead he is surprised when the whole house shakes and a strange steam locomotive stops in the middle of the street. Hero Boy goes outside to investigate and is greeted by Conductor (Tom Hanks), who tells him that the train is bound for the North Pole. The boy hesitates at first, then jumps aboard the mysterious vehicle.

Inside he finds other children in robes and slippers. Hero Boy helps Hero Girl (Nona Gaye) who has lost her ticket and pulls the emergency brake so the train will stop for Lonely Boy (Jimmy Bennett). These acts reveal his kindness and compassion. The kids are amused by Know-It-All (Eddie Deezen), a boy who is constantly trying to impress everyone with bits of knowledge. On this journey, Hero Boy has no idea what is going to happen next: all he can do is give himself up to the experience of not knowing. Venturing out to the top of the train, he meets a Hobo (Tom Hanks) who talks to him about Santa Claus. Hero Boy admits that he wants to believe but he also doesn't want to be bamboozled. "Seeing is believing," suggests the Hobo, who has a habit of suddenly disappearing into thin air.

The Polar Express is the first computer-generated film in which the characters are based on the performances of humans. Because of this technology, Zemeckis and the visual effects specialists at Sony Imageworks can combine very realistic looking characters with some spectacular backdrops and large-scale situations. There is a lively moment in the beginning when a troupe of dancing and leaping waiters deliver hot chocolate to the happy children on the train. There is an exciting scene when the train's brakes fail and it goes on a roller-coaster ride across the frozen landscape. In another, the train tracks disappear under the ice of a lake and the cars slip and slide back and forth to the other side. There is also a wonderful scene where the train almost gets off schedule when it encounters a large herd of caribou.

Tom Hanks plays five characters including the Hero Boy, the train conductor, the Hobo, the Boy's Father, and Santa and manages to make them all likeable. We won't spoil your delight in discovering what happens when the kids arrive at the North Pole and see the mammoth preparations by Santa's helpers for the ritual of the first Christmas gift. Perhaps the most surprising and satisfying dimension of this family film is that there are no villains at all! Imagine that! The only suspense is generated by not knowing what will happen next on the magical journey to the North Pole, on the trip home again, and on Christmas morning in Hero Boy's home. The look of the winter wonderland environment is true to the spirit of Van Allsburg's illustrations in the book. For those fortunate enough to be able to see it, The Polar Express will also be released in a 3-D Imax Version.

By the end of this magical Christmas tale, you will concur with Hero Boy that oftentimes the most real things in the world — the ones really worth believing in — are those we cannot see. Mystery trumps reason and brings joy to the heart. Now there's something to celebrate! 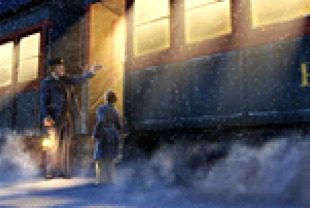 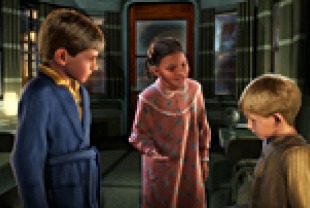 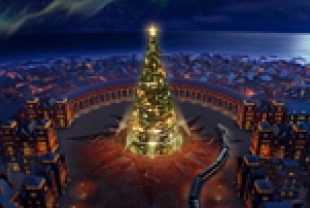