The Keys to the House

Directed by Gianni Amelio, Gianni Amelio
A compelling Italian drama about a father-son reunion and the bravery needed to open one's heart to another.

It's not easy being with those who are broken in mind, body, or spirit. We are nervous in the presence of fragile souls and often want to flee the scene. The fearful and selfish parts of ourselves make us draw away from any reflection on our own brokenness. The Keys to the House is Italy's official entry in the Best Foreign Language Film category for the Academy Awards. It is about a man whose close encounter with a handicapped son whom he hasn't seen for 15 years draws out a torrent of mixed feelings as he tries to be brave and loving at the same time.

Years ago Gianni (Kim Rossi Stuart) lost his young wife in childbirth and their son Paolo was born with physical and psychological problems. He did not stay around to raise his son — another couple has done that. Now they have reluctantly agreed to allow him to accompany Paolo (Andrea Rossi) to Berlin for treatment of his disabilities. At first, the teenager is reluctant to let this stranger help him in any way, wanting to be as independent as possible. Although Paolo's body and mind are broken, he is a very curious and adventuresome teenager.

The father and son reunion is not easy for either one of them. Gianni feels off balance putting on Paolo's shirt or taking off his shoes after putting him to bed. At the hospital in Berlin, the boy is uneasy about having his father in the room during certain humiliating procedures. Gianni meets Nicole (Charlotte Rampling), a French woman who is there with her severely handicapped daughter, Nadine (Alla Faerovich). She realizes that he is deeply confused about his relationship with Paolo and how he should proceed with him. The boy grows restless being couped up in a small hotel room and starts to irritate Gianni with his rebellious moods and temper tantrums. Even more indicative of the sea change that is overcoming Gianni, he pulls his son out of a rehabilitation program, convinced that the doctor is pushing Paolo too hard and causing him physical and mental stress. Nicole senses how troubled this father has become. and she ltells him about the patience and selflessness that is needed to look after a handicapped child. A secret she reveals stops Gianni in his tracks.

Gianni Amelio directs this emotionally wrenching drama inspired by Giuseppe Pontiggia's novel Born Twice. Kim Rossi Stuart gives a riveting performance as Gianni, a young man with his own wife and young child, who is still feeling the guilt for having abandoned his first son so many years ago. After he has spent some time with him and witnessed his courage and curiosity, he decides that Paolo should come be a part of his family. But before springing this idea on him, he takes him to Norway on a spontaneous trip to meet a pretty pen-pal that Paolo is madly in love with based only on her picture. On the journey back, father and son come to see the truth about their relationship and the challenges that must be overcome before they can live together.

The Keys to the House is a very special drama with its sincere and compelling treatment of the bravery needed to truly open one's heart and draw close to someone. 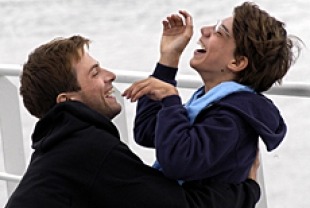