Directed by Brad Silberling
A weird and sometimes wonderful film about three creative kids who have what it takes to overcome adversities.

As the author (voiced by Jude Law) points out in the opening scenes of this weird and sometimes wonderful film, the world depicted here is not a nice place where everyone has a happy smile on their face and feels nothing but warm fuzzies. Bad things happen to innocent people like the three Baudelaire children who are orphaned when their parents die in a fire that completely destroys their large mansion. Luckily, these kids are very special and resourceful: Violet (Emily Browning) at 14 is an inventor; her brother Klaus (Liam Aiken) is a prodigious reader with a very good memory; and little Sunny (played by twins Kara and Shelby Hoffman) is a toddler whose squeaks and grunts nobody can understand. They are translated in subtitles and turn out to be some of the funniest lines in the story. And did we mention that Sunny has ability to bite through wood and metal?

Mr. Poe (Timothy Spall), the executor of the Baudelaire estate, takes the three orphans to live with their closest relative. He is Count Olaf (Jim Carrey), a nasty, greedy, and self-absorbed fellow who has nothing on his mind except getting rid of the kids and taking for his own their large inheritance. Thanks to Violet's inventiveness they escape his first sinister plot to murder them. The Count vows to track them down no matter where they go. The kids are taken next to Uncle Monty (Billy Connolly), a herpetologist whose eccentricities are at least supplemented by a kindly heart. But things do not work out the way he planned and so the children are ushered to the home of Aunt Josephine (Meryl Streep), which hangs precariously on a cliff over water. She is scared of everything and rightly so when the menacing Count Olaf makes another appearance.

Brad Silberling directs this strange brew of comedy, fantasy, and horror. The screenplay by Robert Gordon is based on the books The Bad Beginning, The Reptile Room, and The Wide Window by Lemony Snicket. The three youngsters face many adversities with great creativity and cooperation, proving once again that the family that sticks together can accomplish more than they ever thought possible. And what Violet says is true: When there doesn't seem to be any way to finish a project or a task, there is always something. 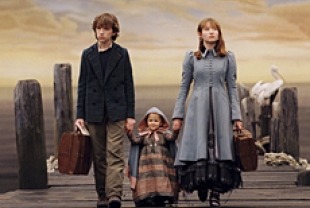 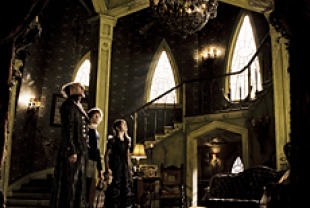 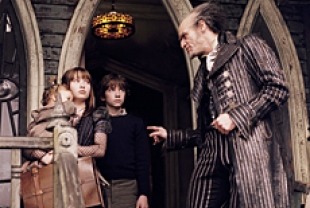