This delightfully entertaining film directed by Gurinder Chadha (Bend It Like Beckham) is a patchwork quilt musical blending elements of Bollywood and Jane Austen. Those who were taken with the Indian music and the dynamic rhythms of the Broadway musical Bombay Dreams will be equally enchanted with this cross-cultural tale.

The Bennet sisters of Jane Austen's Pride and Prejudice have become the Bakshi sisters of Amritsar, India. Their gold-digger mother (Nadira Babbar) dreams of marrying her four eligible daughters off to men of great wealth and status. When Raj (Naveen Andrews), a London-based Indian, arrives with his best friend, Will Darcy (Martin Henderson), an American, for a wedding, everyone perks up since they are not only handsome but successful. Raj falls for Jaya (Namrata Shirodkar), and Will finds himself quite taken with her sister Lalita (Aishwarya Rai), the most independent of the Bakshi women. She is turned off by the American's patronizing views of India and thinks he is too self-absorbed to care about anyone but himself. Yet when Raj asks Jaya to come with him to visit a hotel in Goa that Will may purchase for his family's chain, Lalita accompanies her out of duty. On the beach, she meets Johnny Wickham (Daniel Gillies), a vagabond who happens to know a lot about Will from the past.

Back home, Lalita discovers that her mother has invited Mr. Kholi (Nitin Ganatra) to meet her; he's a wealthy Indian who lives in Los Angeles and does nothing but gush over his wealth and possessions. When Johnny arrives in town, Lalita is unable to spend much time with him so her sister Lucky (Peeya Rai Choudhary) throws herself at him. The amorous complications continue to unravel as the storyline moves to London, to Los Angeles, and back to Amritsar.

Hats off to director Gurinder Chahha for bringing all the elements of this romantic melodrama together in such an energetic and appealing way. Reigning Bollywood superstar Aishwarya Rai is totally convincing as the feisty and beautiful Lalita; she comes across as a likable independent woman who will express herself no matter what the cost. The musical numbers are a rousing mix of glitz and glamour. Several vigorously choreographed large group numbers are nothing short of spectacular. One of them even takes place on an American beach with a Gospel choir in blue robes and a serenading group of surfers provide backup music to the festivities. Bride and Prejudice is a cross-cultural gem filled with many magical moments. 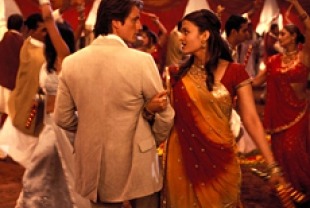