Directed by Khyentse Norbu
A quirky and compelling Buddhist road movie set in Bhutan where the journey is everything.

It is hard for many Westerners to live in the present moment. There are so many distractions that it is difficult to keep the mind focused on what is happening right now. We are constantly thinking about the future and making plans. Buddhist teachers for centuries have given practices designed to bring people back to the present moment through breathing, meditation, or mantras. But the mind persists in its stubborn habit of constructing dreamlands we hope to one day inhabit. We don't look for happiness right in front of us; rather we seek it on the distant horizon.

In this magical and thoroughly entertaining film by Khyentse Norbu, we are treated to a wonderful exploration of the malady of unhappiness created by mind games. This gifted filmmaker is a prominent lama in the Tibetan Buddhist tradition who served as spiritual advisor to Bernardo Bertolucci on the set of Little Buddha. In his first film, The Cup, a monastery was the setting for a playful parable about loving others and giving up one's attachments. His second is a road movie about the dangers and unhappiness created by living in dreamlands of our own making. It was shot in the director's picturesque homeland of Bhutan.

Dondup (Tshewang Dendup) is a government official in a remote rural village in the Himalayas. He is bored with the slow pace of life there and keeps apart from community activities. Each day he eagerly awaits a letter that will advise him about his planned trip to America. He has a high regard for this "land of opportunity" where even those who pick apples make more money than does anybody in Bhutan. When the letter finally arrives, he asks the chieftain of the village, whom he calls a "bearded mosquito" behind his back, for permission to travel to the city for a religious festival. Back in his room, Dondup swiftly packs his suitcase and offers a friend some music tapes and the pictures of Caucasian women he's posted on the walls of his room. He puts on his Nikes and an "I love New York" t-shirt and takes his boombox. When the friend asks if he isn't concerned about looking after his elderly parents, Dondup says that he's sure they will be all right on their own. On the way out of the village, a woman stops him and asks him to join in a housewarming ritual; he declines, saying he's in a hurry, but she insists he stop long enough for her to give him a going away gift. Later, he tosses it casually off a bridge. Halfway down the mountain, Dondup sees the bus approaching and realizes that he has missed his ride. His only option now is to hitchhike.

Anger and impatience take over his mind and body as he waits by the side of the road. A kindly apple peddler on the way to market joins him and offers him an apple. Dondup is concerned that no car will take the two of them so he moves further up the road alone. Always looking out for number one and putting himself before others is his way. Then a Buddhist monk (Sonam Kinga) appears and does a quick and effective read of Dondup. When the official explains that he is going to America, "the land of my dreams," the monk cautions that he should be careful of dreamlands.

When all three of them finally get a ride on the back of a truck, the monk has already begun a tale about Tashi (Lhakpa Dorji), a restless youth whose brother tricks him into entering a magical world where he is carried away by a horse to a faraway woods. There the lost young man is taken in by an elderly man who has a beautiful young wife, Deki (Deki Yangzom). Meawhile back on the road, Dondup's desires are aroused when a rice paper seller and Sonam (Sonam Lhambo), his pretty nineteen-year-old daughter, join their caravan.

Travellers & Magicians is an engrossing and colorful road movie like no other that has ever been made. The nonprofessional actors are all just right in their roles, and the scenery in Bhutan is appropriately rustic and bucolic. This innovative and enlightening Buddhist tale speaks volumes about the source of so much unhappiness in our lives. It offers a witty look at the bounties that ensue from living in the present moment and being attentive to the wonders all around us. To remain attached to an idea about the future is to miss the marvels that abound right now. Restlessness is a royal prison to those who are enslaved to their ideas, hopes, and desires. Better to take one step at a time, mindful of who you are and what is showing up in your life.

The journey in Travellers & Magicians is everything. There is nothing else. 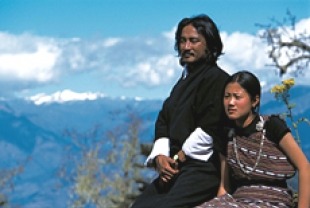 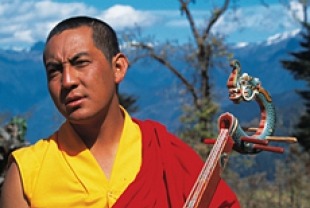 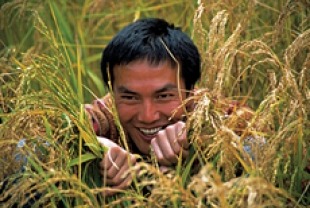