The Exorcism of Emily Rose

Directed by Scott Derrickson
A gripping supernatural thriller about the continuing clash in our society between the forces of reason and science and the forces of faith and religion.

It is hard to believe in these times that some people still cling to rationalism as the only way to realistically view the world and all its mysteries. Unless something can be explained or verified by science, it is thought to be nothing more than superstition. Hard core pragmatism is firmly established as part of the bedrock of the American way of life.

On the other side are those who believe in God and the many mysteries of religion that go far beyond the ability of science to explain. There are principalities and powers in the universe which defy logic. Indigenous societies have for centuries emphasized just how important and scary this realm of demons can be. Shamans have had to muster great resources to do battle with toxic spiritual forces.

The clash between rationalism and religion is at the heart of The Exorcism of Emily Rose, which is based on a true story. M. Night Shyamalan has given new respectability to the genre of supernatural thriller, and this film directed by Scott Derrickson taps into that energy. The screenplay by Paul Harris Boardman and Derrickson uses flashbacks to convey the emotional clout of the possession of Emily Rose (Jennifer Carpenter), a 19-year-old college student who is suddenly possessed by a demonic force that takes over her body and mind.

Father Richard Moore (Tom Wilkinson), the Catholic priest of the church she and her devout family attend, is given permission by his Archbishop to perform an exorcism on Emily Rose, who by the time he begins to work with her has stopped eating and had many seizures and crazy outbursts. When she dies following his efforts to draw out the demon inside her, he is charged with negligent homicide. Erin Bruner (Laura Linney), a high profile lawyer who has enjoyed success in her sensational last case, agrees to take on this hornets' nest only if the head of her law firm promises to make her a senior partner.

Ethan Thomas (Campbell Scott), the prosecuting attorney, is taken aback when Father Moore refuses a plea bargain. The priest believes that he has been called by God to tell the full story of what really happened to Emily Rose. Thomas is a Methodist who doesn't believe in possession or exorcism. He brings in two men who testify that Emily Rose was diagnosed as an epileptic in need of medication. A psychologist opines that she was not only epileptic but also psychotic. However, when Emily Rose asked Father Moore for help, he was convinced that demons had possessed her and her suffering had nothing to do with physical causes and everything to do with spirit.

The character of Erin Bruner is what makes this supernatural thriller work. She is a go-getter on the fast track in her legal career and has never thought very much about spiritual matters. She tells Father Moore that she is an agnostic. But after several meetings he warns her to be on the lookout for any inexplicable happenings in her life. The lawyer suddenly becomes more attentive to what is going on around her, such as finding a gold locket on the street with her initials on it and several scary things that take place at her apartment at three o'clock in the morning. In one of the best scenes in the courtroom, Bruner brings in Dr. Adani (Shohreh Aghdashloo), an anthropologist ,who points out that possession and the ritual of exorcism have been practiced in many cultures around the world. The finale of The Exorcism of Emily Rose is a double whammy revealing what took place in the exorcism and the verdict in the trial.

The DVD include three Behind the Scenes featurettes: "Genesis of the Story," "Casting the Film," and "Visual Design" 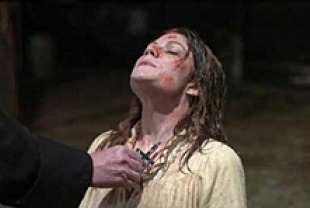 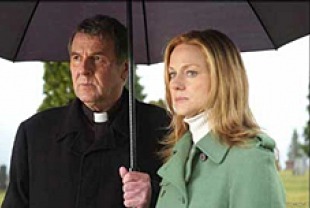