"A story from the ancient Hindu tradition, told to me by my friend Nischala Devi, author of The Healing Path of Yoga, eloquently illustrates what it means to approach food with love-filled, heartfelt appreciation. The parable, which is based on a true story from India, suggests that an appreciative heart empowers food to open its treasures to you — to the degree that you are willing to open your heart to the silent message in your meals.

"Once there was a great man, a saint, who had a devout wife. On their wedding day, after they took their vows, she asked him if there was anything he wanted her to do in their married life, something solely for him. In response, he said, 'The only thing I want you to do is this: every time you serve a meal, as you put the plate in front of me, also place a small bowl of water and a needle next to it.'

"During the fifty years of their marriage, every time she served him a meal, she honored his request by placing a small bowl of water and a needle next to his food. But the reason for his unusual request remained a secret, for she never saw him use either the water or the needle during their years together.

"Toward the end of his life, when her husband was dying, he asked her, 'My dear, is there anything I've done over the years that's caused you any pain? If so, let's resolve that now before I die.' When she couldn't think of anything, he asked again. 'Isn't there even a small thing that's caused you even a slight disturbance in your mind? If there is, please let me know.'

This time she said: 'There's just one thing. On our wedding day, you asked me to put a small bowl of water and a needle beside your plate. And in all the years that we've been married, I've never seen you use either one. And I've sometimes wondered, What's the purpose of them?'

With a slight smile on his face, he said, 'I have such an incredible respect and appreciation for the food that's given to me — and for you who has cooked it with such love and devotion — I felt that if for some reason — in my carelessness — I would drop even one grain of rice onto the table, I wanted to be able to pick it up with the needle and wash it in the water, so I could eat it and not waste it.' "

To Practice: Find a way to remind yourself not to waste food.

— Deborah Kesten in The Healing Secrets of Food: A Practical Guide for Nourishing Body, Mind, and Soul 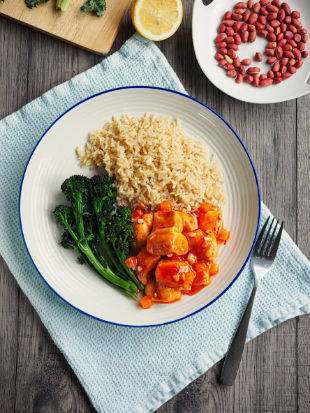