The Religious Art of Andy Warhol

By Jane Daggett Dillenberger
An exploration of his hidden spiritual side, expressed in a series of religious prints and paintings.

Andy Warhol's public persona was that of an enigmatic, shy, and phenomenally successful commercial artist, pioneer of Pop Art, and ever-present celebrity. In this book, art historian and curator Jane Daggett Dillenberger explores his hidden spiritual side that was expressed during the last decade of his life in a series of religious prints and paintings.

Raised in a Slovakian ghetto of Pittsburgh, Warhol participated regularly in the rituals of the Byzantine church and continued to attend mass regularly throughout his life. He was very close to his pious mother who lived with him for 40 of his 58 years. His father's death when Warhol was a teenager and his experience of being shot contributed to a dark fascination with the end of life. This came out in a series of "Death and Disaster" paintings along with portraits of himself with a skull.

Dillenberger examines Warhol's prints based on Renaissance religious paintings, his cross and shadow paintings, and closes with commentary on his large series of paintings and drawings based on Leonardo da Vinci's "The Last Supper." Here the Pop artist brought this classic into the twentieth century with some interesting symbolic additions. 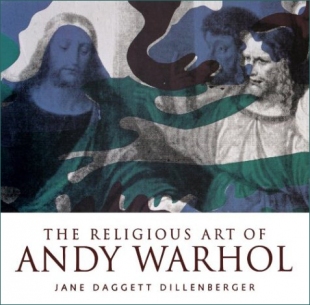