Pacem in Terris A Love Story

By Frederick Franck
The story of how Franck, a painter and sculptor, turned ruins of an old mill into a transreligious oasis.

Ninety-four-year-old Frederick Franck is a Renaissance man who has excelled as an artist, philosopher, and peace activist. His sculpture and artwork are in the permanent collections of the Museum of Modern Art, the Whitney Museum, the Tokyo National Museum, the Cathedral of St. John the Divine, and other public and private collections. He is the author of more than 30 books including The Zen of Seeing.

Above all else, Franck is a bridge builder whose spirituality points to a new way of being in the twenty-first century. Today he and his wife live in Warwick, New York, where they have converted the ruins of an eighteenth-century water mill into "an oasis of peace and sanity" called "Pacem in Terris" (Peace on Earth). This silent, nonsectarian, pilgrim space has been opened up for Catholic, Protestant, Unitarian, Jewish, Buddhist, and Shinto services. That is why Franck calls it a "transreligious sanctuary."

In this imaginatively illustrated paperback, the author discusses his 34-year odyssey of turning "a garbage dump" into a sacred site where nature, spirit, and prophecy are united as one. Franck writes words of tribute to three men he had the privilege of sketching: the Protestant doctor Albert Schweitzer, the Buddhist sage D. T. Suzuki, and the Catholic Pope John XXIII — he calls them "exemplars of the fully human." Throughout the book, he revels in the gracelets and synchronicities that have marked his life.

Franck's words are thrilling, especially as evidence of his vocation as one who brings things together. But even more exciting are the pictures of his wood and steel sculptures. I was especially impressed with St. Francis, a ten-foot tall piece with his arms lifting to the sky crowned by blackbirds flying around him. When Pacem in Terris was opened in 1966, Franck wrote: "May the Spirit soar and make us humans see our unity." By purchasing, reading, and sharing this paperback treasure, you are doing just that! 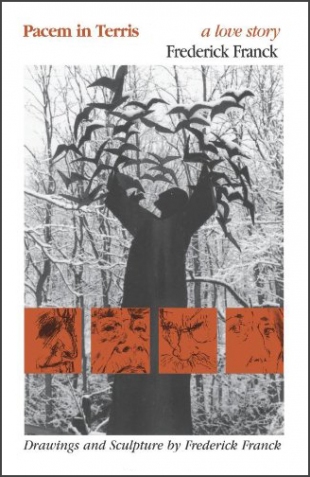