Creative Spirituality The Way of the Artist

By Robert Wuthnow
Interviews with over 100 artists who discuss the ways their work reflects their spirituality.

In another example of his mapping of the varied spiritual contexts of America, Robert Wuthnow, Professor of Sociology at Princeton University, presents contemporary artists as the theologians of our time. He notes: "Few have received conventional training in seminaries, but their stories capture the public's imagination and their songs and images stir the soul in ways that often rival the teachings of religious leaders. If theology is the practice of drawing connections between religious truths and contemporary cultural concerns, then artists may indeed be functioning as theologians. Although their knowledge of religious tradition is often scant, their work sometimes does reflect considerable engagement with tradition, while in other instances it raises profound questions about such issues as the character of God, the reality of evil, and what it means to be a responsible person."

Surveys support this understanding. Wuthnow quotes one in which 89 percent of Americans agreed that the arts and humanities "inspire peoples' minds and spirits," and 81 percent agreed that they "play an important role in communicating moral and ethical values." Wuthnow has interviewed over a hundred artists including novelist Madeleine L'Engle, playwright Tony Kushner, dancer Carla DeSola, playwright Richard Foreman, memoirist Richard Rodriguez, woodcarver David Ellsworth, and others. These creative individuals discuss the ways their work reflects their spirituality.

Wuthnow reveals how much we can learn from artists about the quest for identity, respect for the body, and a closer connection with the earth, time, and transcendence. The author concludes, "Creativity comes through an openness toward the mystery of God and a recognition that emotion as well as intellect, desire as well as deity, must be a part of one's relationship with God." 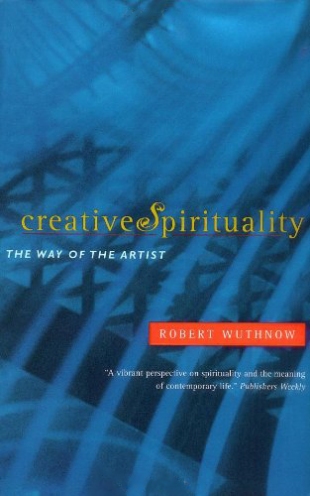