Drawn to the Light Poems on Rembrandt's Religious Paintings

A soul-stirring book that deserves a wide audience.

There is something powerful and mysterious in the paintings of Rembrandt that speaks to our deepest yearnings. Henri J. M. Nouwen was so mesmerized by this Dutch artist's painting The Return of the Prodigal Son that he wrote an entire book on it. Marilyn Chandler McEntyre, professor and chair of the English Department at Westmont College in Santa Barbara, California, is very much taken by the light in Rembrandt's works. In this elegant volume, she probes the multiple meanings and moods in eighteen of his religious paintings through poems on each one.

At the outset, McEntyre contemplates the significance of the light that shines in these works of art and concludes: "It is the artist's vocation to surprise us into remembering that the ordinary elements of our messy, material lives are gifts. Rembrandt restores us to a sense of the sacramentality of daily life. This daily life provides the terms in which he 'reads' the biblical stories and invites us to read them — moments of real encounter among real people working out their salvation with a God who made and makes himself known in palpable, visible, surprising ways. Their faces tell of sorrow and struggle and hard-won understanding; an insistent light has broken into the dark rooms and landscapes they inhabit. Emerging out of so much ambient shadow, these figures remind us to give thanks for the light we live by, even in the darkest hours."

McEntyre's terse but poignant poems prove to be a fine means of dealing with the allusive emotions that flutter in our hearts as we view these extraordinary paintings. She writes of his Self-Portrait done in 1628:

"He painted his own image year after year,
tracing time with a fine-haired brush
as smooth planes dried to folds
and light shifted and shadows deepened.
He learned how the dark defines
what can be seen."

While meditating on the painting and the poem, we realized how important it is to see the positive aspects of the dark and not to demonize it. McEntyre also amplifies the emotions we felt viewing Abraham and Isaac, Moses Breaking the Tablets of the Law, Hannah and Samuel, Simeon with the Christ Child in the Temple, Jesus and the Woman at the Well, Christ at Emmaus, and others. This is a soul stirring book that deserves a wide audience. 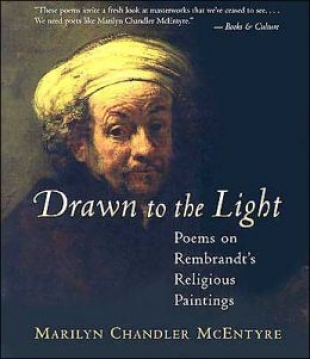